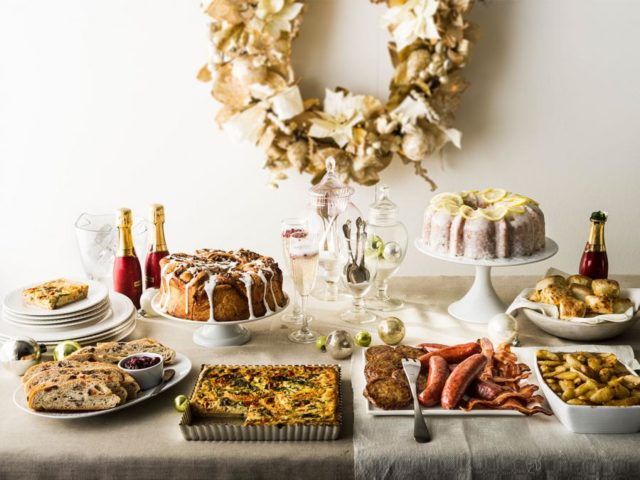 THE HOLIDAYS ARE nearly upon us, which we all know means one thing: a whole lot of eating. While it can be incredibly tempting to indulge yourself in a cornucopia of turkey and stuffing, you’ll also probably regret it when you realize you’ve gained way more weight than you wanted to.

Here are 10 scientifically proven ways to keep your stomach in check during the next few weeks.

With a jam-packed schedule, it’s easy to rush through meals. But slowing your pace gives your body time to register its fullness. In a study published in the Journal of the American Dietetic Association, researchers measured how many times they chewed while snacking on pizza rolls. When participants chewed twice as many times as normal, they ate 15% less. “Take frequent pauses during your meals,” suggests Sharon Richter, R.D., a dietitian in New York City. “Put down your fork or have a sip of water between bites.”

2. Scale down your dishes

When it comes to reining in your appetite, bigger isn’t better. Research shows that people polish off about 92% of what’s on their plates, and you’re more likely to load up a large dinner plate than a smaller salad one. Case in point: Research published in the American Journal of Preventive Medicine showed that people served themselves at least 34% more when given a 34-ounce bowl than one half the size.

“Having something between meals can keep you from getting too hungry, which can cause you to binge at your next meal,” explains Richter. She recommends eating a 250-300 calorie snack about two hours before heading to dinner or that holiday party. A few smart options: turkey slices rolled up with avocado, low-fat Greek yogurt with almonds and fruit, or a hard-boiled egg with whole-wheat toast.

Signs of dehydration—think zapped energy—can mimic hunger, which can dupe your brain into craving food. Avoid the mixed signals by sipping H2O throughout the day. “Have a glass of water or two before your snacks and meals,” suggests Richter. The liquid will fill you up, which can keep you from overeating. In fact, Virginia Tech scientists found that people who drank two glasses of water right before a meal ate 75 to 90 fewer calories than those who didn’t.

Variety may be the spice of life, but it can also be a dietary downfall. “People tend to eat more when they have a number of different options in front of them,” says Richter. Headed to a holiday buffet? Limit yourself to just a few of your favorite dishes. “Fill half of your plate with veggies, and the rest with lean protein and a starch,” she says.

Yes, Jimmy Kimmel is hilarious. But staying up to watch his show can rev up your hunger the next day, according to a study from the Mayo Clinic in Rochester, MN. Researchers found that people ate 549 more calories on the days after they slept 80 fewer minutes than usual. Other research shows that sleep deprivation increases the body’s production of the hunger-stimulating hormone ghrelin while decreasing its amount of leptin, an appetite-suppressing hormone—delivering a double-whammy to your self-control.

7. Pump up the protein

Stave off overeating by adding a small amount of protein to every meal and snack. When researchers from the University of Washington had volunteers get either 15% or 30% of the daily calories from protein for two weeks, they found that the latter group reported feeling more satisfied throughout the day—and dropped more pounds. “It takes your body longer to digest protein, which can keep you satisfied for longer,” explains Richter.

Choosing whole-wheat over white bread may help slow down your fork during dinner. In a study published in the American Journal of Clinical Nutrition, people who started their day with high-fiber cereal ate 31% fewer calories’ worth of pizza at a following meal than those who dined on white bread. Your body takes longer to process a fiber-rich meal, prolonging that sense of fullness, explain the researchers. Experts recommend getting at least 25 grams of the rough stuff each day from fruits, vegetables, and whole grains.

9. Get a handle on stress

Between work projects and social obligations, your stress-meter may be at an all-time high. This spurs your body’s production of cortisol, triggering cravings for sugary foods. And a study published in the journal Nature Neuroscience found that it may also heighten levels of gherlin. To keep your stress level in check, remember to schedule in some downtime into your busy day. Feeling like you’re about to blow your lid? Take a few deep breaths. Julie Chen, M.D., a San Jose, CA-based integrative medicine physician, recommends this technique: Breathe in for a count of four, then breathe out for a count of eight. Repeat for a few minutes.

If you’ve ever polished off a bag of chips during that House of Cardsmarathon, you know that food goes down all too easily when you’re preoccupied. In fact, eating while distracted can up your intake by 39%, according to a review of 24 studies published in the American Journal of Clinical Nutrition. So step away from your computer or television, and take the time to savor every bite.

HERE IS WHY YOUR ENERGY IS CRASHING MID-WORKOUT

4 THINGS YOU PROBABLY DIDN’T KNOW ABOUT YOUR METABOLISM

HOT WATER DEBATE: HOW MUCH WATER DO YOU NEED?