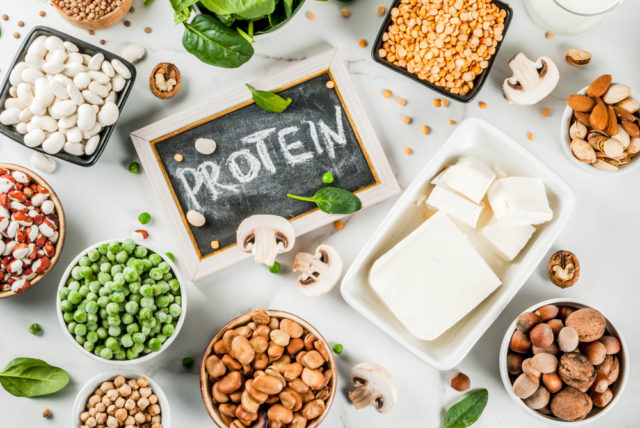 As all athletes know, proteins are the building blocks of life and a key nutrient in building muscle and strength. Protein fuels our workouts, aids our recovery, and even supports long-term brain functioning.

But contrary to popular belief, protein is found in more than just meat. Some of the healthiest forms of protein in the world come from plants and are incredibly efficient at synthesizing amino acids and promoting cell growth and repair.

When comparing the protein content of meat and plants, one thing to consider is how much protein a food contains compared with the number of calories and weight it has. For instance, chicken and other animal-based proteins are high in calories even though they contain a lot of protein. Vegan and vegetarian foods don’t typically contain as many grams of protein, but pound-for-pound, they’re a much more efficient source of it.

Take broccoli, for example. On hand, broccoli has more protein than beef and contains about 4.5 grams per 30 calories. But on the other hand, who wants to eat a pile of broccoli just to get decent amount of protein in one setting.

That said, this efficient protein-to-calorie ratio plant foods have is partly why it’s easier for vegetarian bodybuilders to build leaner-looking physiques without experiencing the drastic bodyweight swings like their meat-eating counterparts.

With plant-based proteins, it is important to distinguish between incomplete and complete proteins. However, this honestly isn’t as big of a deal as the media has made it out to be. Something we have learned in recent years is that our bodies are capable of using all sources of amino acids to form complete proteins.

In other words, eat a good variety of plant-based, whole foods that are protein-rich, and you will be equipped to build some serious muscle. Eating more protein isn’t necessarily better for your body, and in fact, an excess of protein is actually linked to several diseases. Unwanted weight gain, high cholesterol, and reduced brain and liver function are common side effects associated with too much protein in the diet.

So the big takeaway here is that more isn’t necessarily better. Protein efficiency should be your #1 goal over protein quantity, and plants are clearly superior in this regard.

Allow me to introduce you to 12 solid choices for vegan protein. All nutrition facts are based on the recommended serving size.

While beans are normally low in the amino acid known as methionine, soy beans are a complete protein and deserves its time in the spotlight. However, beware of the GMO versions of this vegan food. Tempeh and natto are made by fermenting the beans, but tofu is probably the best known soy product.

Lentils are great for athletes looking to boost their protein intake quickly and efficiently. I like to use them in vegan burger recipes and veggie wraps.

Black beans are one of my all-time favorite vegan protein sources because they are so versatile. I use them in a variety of dishes, including vegan chili and stir-fry recipes.

Let’s start this off right, because peanut butter sandwiches simply kick ass. They also happen to be protein-rich with a sizable amount of essential amino acids and plenty of healthy fats.

Why Ezekiel bread, you ask? It has wheat, barley, beans, lentils, millet, sprouted grains, and spelt. These combined ingredients contain all the essential amino acids, and they are also high in fiber and vitamins.

If you’re not gluten intolerant, this protein source rocks the house. Seitan is made by mixing gluten (the protein in wheat) with herbs and spices, hydrating it with water or stock, and simmering it in broth. But this one’s not complete on its own—it needs to be cooked in a soy sauce-rich broth to add gluten’s missing amino acid (lysine).

Quinoa looks much like couscous, but it is more nutritious. Full of fiber, iron, magnesium, and manganese, quinoa is a terrific substitute for rice. It’s easy to cook up ahead of time for meal prep, and is a staple in my own vegetarian bodybuilding diet.

Hemp is a complete protein and rich in all essential amino acids. It is high in fiber, and most of its calories come from beneficial proteins and omega-3 fatty acids. Hemp boosts energy, thanks to the high amounts of magnesium it contains.

This vegan food has significant amounts of all nine essential amino acids, as well as plenty of magnesium, zinc, iron, and calcium. Hemp is a rare vegan source of omega-3s. In addition to seeds, hemp also comes in the form of powder, which mixes wonderfully into smoothies, and oil, which can be used as a butter substitute and makes a delicious salad dressing.

Chia seeds are the highest plant source of omega-3 fatty acids, and they contain more fiber than flax seeds or nuts. Chia is also a powerhouse of iron, calcium, zinc, and antioxidants, but the best thing about these little seeds is that they form a goopy gel when combined with milk or water. You can commonly find seeds in the form of ground or milled chia, white chia, and pre-hydrated chia.

Also known as pepitas, pumpkin seeds have many health benefits, and I like to use these in many of my recipes. They’re extremely versatile and can be added to practically anything, especially salads and cereals.

Contrary to popular belief, this member of the algae family is not a complete protein, since it’s lacking in methionine and cysteine. All that’s needed to remedy this is to add something with plenty of these amino acids, such as grains, oats, nuts, or seeds.

Almonds and peanut butter are two of my preferred sources of heart-healthy fats and vitamin E. They’re also a good source of calcium.

This is a truly exciting time to think about going plant-based because the demand for vegan products is rapidly increasing, and it’s producing more variety. It’s also a smart idea for meat-eaters to vary their protein sources to ensure their bodies are getting a healthy balance of nutrients.

One of the biggest obstacles in our society is educating people about how to replace the meat on their plates with plant-based proteins that are healthier, more environmentally friendly, and just as delicious. Start incorporating these plant foods into your daily meals, and you’ll see how satisfying they are and how they lead to powerful results at the gym.

HOW PREBIOTICS AND PROBIOTICS KEEP YOUR GUT HEALTHY