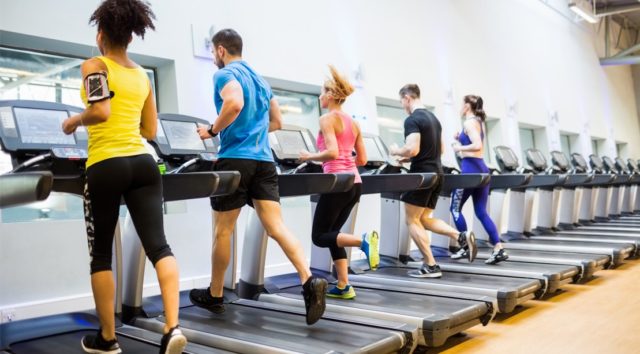 TRAINING ON A TREADMILL can get super-boring, super-fast. But it can be a bad-weather necessity—unless you’re willing to sacrifice your cardio. Rob Sulaver, a trainer with Peak Performance NYC and founder of Bandana Training, answers our burning questions on the advantages and disadvantages of treadmill training. Want to know if it will slow you down or affect your “outside” running program? Sulaver covers everything from what to do with your form to how to avoid that embarrassing flying-off-the-treadmill moment—which is funny when it’s someone else, and just embarrassing when it’s you.

Should my form differ on a treadmill?
“Good running mechanics are good running mechanics across the board,” Sulaver says, so don’t change up your running form. Instead, simply be wary of where you are on the treadmill. Don’t run so far back that you will fly off into the wall, but don’t crowd to the front, which can shorten your stride.

Will training on a treadmill slow me down?
No, but it might not prepare you for race day as much as you want. “If you are training for a race,” Sulaver says, “make sure to transition to running outside as you get closer to the race. That will mimic your event more than the treadmill does.” If the weather is crummy and you prefer running inside, try to get at least one or two runs a week outside, and increase that as you approach race day.

How can I use a treadmill as an advantage in my training?
You can set the speed and incline, so it’s very easy to progress your run in controlled increments. “Treadmill training can help you push your pace,” Sulaver says. “If you run an 8mph mile, but then you set the treadmill at 8.5mph, you’re forced to run faster and you are forced to keep up.” Using the treadmill to increase your pace can push you beyond your comfort zone.

Are there any injuries to be wary of on the treadmill?
“Falling off the treadmill,” Sulaver says. “I’ve seen it happen numerous times, and it’s not pretty.” To prevent a slip, focus on your run instead of the television. “The biggest problem I see with treadmill training is that people hop on a treadmill and they want to zone out,” he says. “They don’t want to be involved in the workout—they want to forget about it, and let it happen without even being aware of it.” Instead of zoning out, aim to be very engaged in your workouts across the board.

As for shin splits? Sulaver doesn’t believe treadmills alone cause them, but says if you’re shin-splint-prone it’s important to increase both intensity and volume of training gradually. “It’s also important to take care of your shins pre- and post-workout, which means stretching and soft-tissue exercises,” he says. “If it gets very bad, you may need to cross-train a bit until the pain and inflammation is more manageable.”

What can I do to combat boredom?
Sulaver recommends using the specifics of a treadmill to do interval work, which increases the engagement of both your mind and body. “If you can periodize your treadmill training, just like you periodize all of your other training, you will make more progress,” he says. What follows is a four-week treadmill sprint workout designed by Sulaver that gets harder as the weeks progress. Perform this sprint workout twice a week for maximum results. Start each workout with a warmup of dynamic stretching or using a foam roller, and end each workout with a cool-down of static stretching.

TRAINING TIPS FOR WHEN YOU’RE ON THE GO

HOW TO BULLETPROOF YOUR SHOULDERS WITH BAR HANGS

GET YOUR OMEGAS FOR BETTER HEALTH