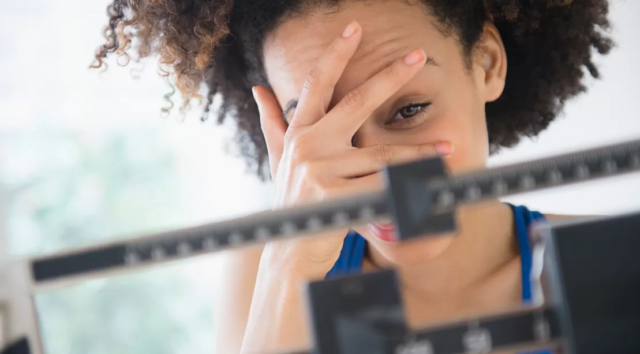 Your weight is up, despite regular workouts and a clean diet. Worse yet, this isn’t the first time. You haven’t been cheating—you swear.

So what’s going on?

It could be several things, and unless you’re aware of the source, you may assume it’s the usual diet and exerciseculprits. But if you know you’re on target—and you begin to notice other symptoms as well—consider these five drug- and medical-related possibilities.
1. Prescription Drug Side Effects

If you began gaining weight after starting a new medication, your prescription may be the problem. “Doctors tend not to talk about this,” says Lisa Bernstein, MD, assistant professor of medicine at Emory University School of Medicine in Atlanta. “We tend to focus on the life-threatening effects of the illness or condition, but weight gain can certainly be disturbing for someone who’s very focused on health and keeping her body in shape.”

In recent studies, the antidepressants Elavil and Paxil caused patients to pack on 40 pounds in just a year, and Depakote, a drug used to treat seizures, caused a weight gain of 60 pounds. These drugs aren’t the only ones. Other suspects include antacids/acid blockers, anti-anxiety drugs, other antidepressants and anti-seizure medications, antihistamines, beta-blockers, diabetes drugs, migraine medications, oral contraceptives and tranquilizers.

Don’t ever stop taking these drugs cold turkey, however. Side effects, which can stem from a rebound effect or the medical condition itself getting out of hand, are often far more detrimental than the weight gain. Fortunately, Bernstein says, with so many drug classes to choose from, physicians can almost always offer an effective alternative. So share your concerns with your doctor and follow his or her advice.

If taking a drug that causes you to gain weight is a must for your health, make necessary dietary adjustments, such as reducing the number of calories you take in. You can also prevent weight gain by increasing your activity level. Vary your calorie intake and amount of exercise until you settle on a formula that prevents the weight gain caused by your medication.

Even if you’re not taking medication, emotional conditions–especially those that go unrecognized–can still affect your weight, says Philip R. Muskin, MD, professor of clinical psychiatry at Columbia University College of Physicians and Surgeons in New York City. “You can’t live without carbohydrates, but we don’t call mashed potatoes and mac and cheese ‘comfort foods’ for nothing,” he remarks.

In other words, if you’re feeling angry, anxious, depressed or guilty, you may be turning to food to assuage those feelings, even without realizing it. The challenge lies in admitting the underlying problem and seeking help. Muskin calls depression “insidious” because it makes us think certain events are the cause when instead it’s actually the depression coloring our perception of life’s events.

Anxiety is a corollary to depression, the yin to depression’s yang, and it should be addressed in the same way as depression. The same is true for anger and guilt – particularly inappropriate guilt, which can be an act of grieving.

“For some people, there’s something about food that makes them feel better,” Muskin says. “Not everyone will drink or eat to excess, but there are people who can’t control that. They do it because they feel terrible about themselves. But for that minute – or five or 10 – that feeling goes away.” So cut yourself some slack, and ask whether you’ve been using food as an escape from negative feelings. If so, and if those emotions persist, seek help from a qualified counselor or therapist. Or speak to your doctor, who can refer you to one.

Another condition that can lead to weight gain caused by hormonal imbalance is polycystic ovary syndrome (PCOS), which affects as many as one out of 10 women in the United States. Approximately 65% of these women are overweight or obese.

“Women with PCOS may have trouble losing weight because they tend to be insulin-resistant,” explains Ricardo Azziz, MD, MPH, chair of the department of obstetrics and gynecology and director of the Center for Androgen-Related Disorders at Cedars-Sinai Hospital in Los Angeles. “They tend to be hungrier more often and choose foods that are higher on the glycemic index.” These foods include fast-digesting carbs such as white breads, white rice, baked potatoes and other starches, as well as processed foods that break down quickly during digestion and rapidly release glucose into the blood. If eaten frequently and in large quantities, they can lead to fast weight gain.

PCOS often manifests early, even during the teen years. Symptoms include acne, facial hair, thinning scalp hair, irregular periods, heavy bleeding and infertility, all of which are linked to the overproduction of androgens, or male hormones. Only some patients develop the ovarian cysts that give the disorder its name.

Despite a high incidence of PCOS, few doctors are truly familiar with it, says Azziz, who’s one of the leading experts on the syndrome. In fact, the average patient sees seven physicians before being diagnosed. So if you suspect PCOS, do your homework, be persistent and consider consulting a reproductive endocrinologist. Treatment will likely involve a specific diet and exercise plan, and careful monitoring

Located at the base of your neck, the butterfly-shaped thyroid gland is responsible for producing metabolism-regulating hormones. These hormones establish and maintain the rate at which your body uses fats and carbohydrates. They also help control body temperature, influence heart rate and help regulate the production of protein. When your thyroid is underactive, the resulting hormonal deficiency can significantly slow your metabolism and lead to extra pounds.

“Many patients complain that they don’t eat much but are gaining weight,” says Sathya S. Krishnasamy, MD, an assistant professor at University of Louisville Hospital in Kentucky and a staff endocrinologist at Louisville VA Medical Center. “The reason is that everything slows down. Your basal metabolic rate, or the number of calories your body expends at rest, slows down. Oxygen consumption slows down. And you tend to accumulate water and salt.”

Women older than 50 are most at risk for hypothyroidism, but the disease can affect anyone, even teens and children. Symptoms vary widely, according to the severity of the hormonal deficiency, and tend to be minor until the later stages of the disease, but feelings of fatigue or sluggishness can be common early on. “People with hypothyroidism don’t eat much, they don’t work much, they don’t have much energy,” Krishnasamy explains.

Other symptoms include increased sensitivity to cold; dry skin; a pale, puffy face; constipation; pain or stiffness in the joints; and aching, tender or swollen muscles. Excess menstrual bleeding and infertility problems are also common, as is depression. Check with your physician if you have any reason to suspect your thyroid, especially if a parent or grandparent has an autoimmune disease. He or she will conduct a blood test and likely prescribe an oral medication.

Named after the physician who first identified the condition, Cushing’s syndrome is another endocrine disorder that can cause weight gain, often quite rapidly. It stems from high levels of cortisol in the blood and is characterized by abnormal fat deposits, frequently in the form of a hump between the shoulders, a rounded (or “moon”) face, or pink or purple stretch marks. Extra weight usually settles around the midsection and upper back.

Cushing’s shares symptoms with hypothyroidism, including acne, thicker or more visual body and facial hair, and irregular or absent menstrual periods. According to Krishnasamy, depression and anxiety are also common. You’ll want to be on the lookout for facial flushing, fatigue, and muscle weakness, fragile skin that bruises easily, and cuts, insect bites and infections that are slow to heal.

The most common cause of Cushing’s is oral corticosteroids, such as dexamethasone, an anti-inflammatory, and prednisone, which is commonly prescribed for asthma, inflammation and rheumatoid arthritis. Fortunately, decreasing (and eventually stopping) these drugs is usually enough to reverse the problem. But never stop taking any medication without co

Tip: Do a Reality Check

Whether you’re eating to console yourself, giving in to a craving or not eating much at all, the keys are to be honest and to examine all of your feelings and actions. Are you gaining weight because you’re ignoring a “few” extra calories? Or are you sticking to your eating plan yet experiencing some of the symptoms listed here?

If it’s the latter, visit your doctor without delay. He or she may hold the key to improving your health, losing those extra pounds and a happier, healthier you.

WHY SUPER-SPICY CHILI PEPPERS CAN SLASH YOUR RISK OF DEATH

THE FIT CHICK’S GUIDE TO FALLING IN LOVE WITH CYCLING