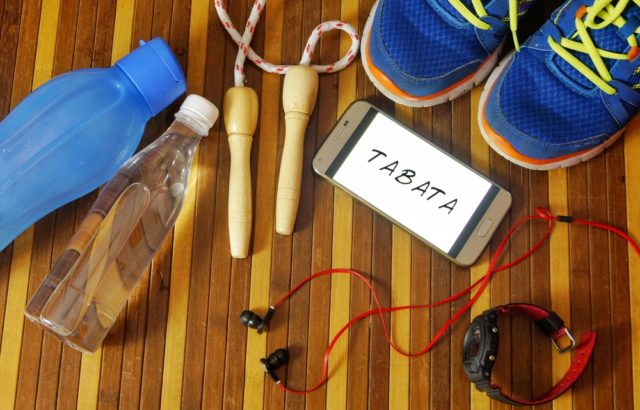 If we told you there was a way to burn more calories—in this case, a whopping 500 in just one workout—boost fat loss, enhance muscle gains and improve your cardiovascular fitness without having to endure another long-winded weight-training and treadmill session, you might grab your phone and dial the consumer fraud hotline. But this is one of those rare occasions when the idiom “it seems too good to be true,” would fall on deaf ears. And if you’re looking to take your fitness and fat-loss efforts to the next level without spending more time in the gym, you’ll want to add some of these high-intensity activities to your already-solid foundation.

The Tabata protocol is an extremely high-intensity training method that produces results very quickly. A Tabata workout or sequence is an interval training cycle of 20 seconds of exercise performed at maximum intensity followed by 10 seconds of rest, repeated eight times for a total of four minutes.

The Burning Edge: A study conducted at the National Institute of Fitness and Sports (Japan) found that subjects who performed Tabata five days a week for six weeks improved their maximum aerobic capacities (a measure of the highest amount of oxygen consumed during maximal exercise) by 14 percent and anaerobic capacities (a measure of maximum output over a short period) by 28 percent.

In a nutshell, the extremely short rest periods of Tabata force your body to move between energy systems, producing vast amounts of lactic acid and growth hormone that push your body into accelerated fat-burning mode for hours postworkout.

Tip: To reach your goal of burning 500 calories, perform four separate Tabata intervals, each four minutes in length. Include a five-minute warm-up and cool-down.

“The usual cardio-boxing workout consists of a 10-minute warm-up and boxing training techniques — including shadowboxing, punching target mitts, and hitting the heavy bag and speed bag — combined with cardio and muscle-conditioning methods,” says Andy Dumas, a Canada-based certified boxing coach, fitness consultant, author and TV personality. “The main difference is there’s no actual sparring with an opponent.” Like most workouts, every class starts with a solid warm-up. The rest of the hour-long session consists of intervals that mimic boxing rounds: three minutes of intense training followed by roughly 60 seconds of rest.

The Burning Edge: Cardio boxing is rated as one of the best forms of exercise because it conditions the whole body, and builds strength, endurance, balance, agility and coordination at the same time. According to Dumas, however, it’s the weight-loss benefits that top the list for regular attendees. “Jumping rope is one of the best ways to burn calories,” he says. “Some studies show you can burn up to 200 calories skipping rope in just 15 minutes. Most cardio-boxing classes include interval training, and various jump-rope exercises between rounds on the heavy bag and target mitts.”

Tip: “The best instructors are certified in not only fitness but also boxing,” Dumas says. “It’s important for beginners to learn proper punching technique and a good instructor can help teach that.”

The high-intensity interval training (HIIT) method involves short intervals of high-intensity work — training near 90 percent maximum heart rate (MHR) — followed by intervals of slower-pace active recovery. “To keep your body guessing [and the scale moving], you have to either add more cardio or increase the intensity,” IFBB fitness pro Allison Ethier says. “Most people don’t have time during the week to devote to multiple cardio workouts. Adding a few hard HIIT sessions will get the job done and save a lot of time.”

The Burning Edge: Research confirms the shorter-duration HIIT method is superior to steady-state cardio for losing fat. In a landmark 1994 study published in the journal Metabolism, researchers had one group follow a 15-week HIIT program and another perform only steady-state cardio for 20 weeks. The data revealed that the steady-state group burned 15,000 more calories but the HIIT group lost significantly more bodyfat.

A more recent study conducted at the University of New South Wales (Aus­tralia) reported that a group of women who took part in a 20-minute HIIT program of eight-second sprints followed by 12 seconds of rest lost six times more bodyfat than a group that did steady-state cardio for 40 minutes at 60 percent MHR. And that’s not HIIT’s only fat-fighting benefit. The increase in intensity boosts the metabolism and keeps it higher longer after your workout is over. This is known as EPOC, or the afterburn effect, which in part helps fuel the repair of exercise-induced damage.

Research on subjects using either low-intensity protocols or the HIIT method found that the HIIT group burned an average 10 percent more calories in the 24 hours following exercise than the low-intensity groups, even though the total calories burned during each workout were the same. So if you train intensely enough, you’ll burn calories just sitting on the couch afterward.

Tip: Keep your HIIT workouts fresh by taking it outside with exercises such as jumping jacks, jump rope, hill or stair sprints and jump squats. Whatever you choose, you’ll need to perform 90 seconds of high-intensity work followed by 30 seconds of slower-pace recovery for a total of 32 minutes (including warm-up and cool-down). But Ethier cautions: “You’ll want to ease into this type of cardio training. To start, try doing 10 seconds of hard work followed by 50 seconds of recovery. By starting off slowly, you’ll be able to determine how much your body can handle in one session and avoid injuries.”

A typical boot-camp class is akin to a circuit workout, focusing on continual movement from one activity to the next with little to no rest in between. And the only similarity between boot-camp classes is they’re conducted in a group environment. “Every class is unique,” says Mike Davies, trainer of fitness and figure pros, and owner and founder of The Fitness Factory in Columbus, Ohio. “Any given class can incorporate upper- or lower-body plyometrics or both, flexibility training and/or bodyweight conditioning moves such as push-ups, bear crawls, crab walks, etc. The key is to constantly challenge the body by changing up your movements.” An hour session typically consists of about 10 exercise stations performed for 60 seconds each with 30–60 seconds of rest in between.

The Burning Edge: Improved cardiovascular fitness, strength, agility, power and flexibility plus reduced levels of stress are just a few of the possible gains for $20–$25 per session. Anecdotal reports indicate that boot-camp workouts also burn more calories because they tax the body’s major energy systems. “You push your anaerobic threshold — the point at which lactic acid starts accumulating in the body — and recruit more muscle fibers than when doing basic weight-training movements or regular cardio alone,” Davies explains. “Your [caloric] output will be higher.”

The anecdotal reports are in accordance with a recent study commissioned by the American Council on Exercise. Researchers at the University of Wisconsin-La Crosse reported that a group of test subjects who followed a 40-minute boot-camp instructional video that included high-intensity kicks and punches interspersed with low-intensity dumbbell movements burned an average 600 calories per hour.

Tip: “When choosing a boot camp, find one that incorporates sprint work and abdominal exercises in addition to body-conditioning moves,” Davies says.

Bikram or “hot yoga” is a branch of the ever-popular Hatha yoga, a slower-pace introductory yoga that focuses on meditation and breathing in each pose. Like Hatha, Bikram classes consist of holding and repeating asanas (postures or poses), but this is where the similarity ends. Bikram is a lot more strenuous, composed of 26 asanas performed in sequence in a room that’s 105 degrees F with 60% humidity. Unlike tradi­tional forms, the Bikram method is said to be a comprehensive workout that includes cardio, muscular strength and endurance, flexibility and weight-loss components.

The Burning Edge: For a drop-in fee of only about $12 per session, yoga lays claim to some pretty hefty health perks. An hour-long session can enhance respiratory, endocrine, lymphatic and digestive function. And it’s precisely through the improved function of these systems that yoga is credited with supporting weight-loss efforts. One study published in Alter­native Therapies in Health & Medicine found that regular yoga practice (an average 30 minutes a week for at least four years) attenuated weight gain in middle-age subjects, proving most effective among overweight individuals.

Tip: Excessive sweating can lead to dehydration. Protect yourself by consuming at least 16 ounces of water before a Bikram yoga class, and up to 40 additional ounces during and after.

HOW TO SQUAT HEAVY WITHOUT BACK PAIN

CRANK UP YOUR METABOLISM WITH KETTLEBELL CONDITIONING