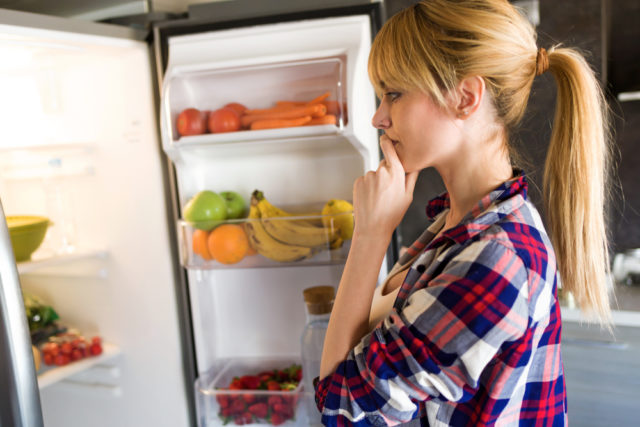 The usual suspects behind diet sabotage are well documented: candy, soda, sugary cereal, any food item with the word “lard” posted as one of the ingredients.

However, there’s a group of foods deceptive enough to twilight as innocent additions to a diet program, but moonlight as unwanted add-ons to a waistline.

Yep, these diet busters will put a bulge where you’d rather see a divot.
SUGAR-FREE GUM

Not to burst anyone’s bubble, but just because the label says “sugar free” doesn’t mean it’s a green light to chew gum all day, every day. Popping in a piece or two won’t hurt you, but at day’s end, if empty packs end up in the trash bin, it’s time to break the habit.

WHY IT’S BAD: Sugarless gums use artificial sweeteners that act exactly like sugars when too much has been ingested.

HOW IT’S BAD: Synthetic sweeteners include sugar alcohols, such as sorbitol, which can hinder digestion, cause bloating and prevent fat burning when you’re trying to reduce bodyfat to the low single digits.

AVOID THE BUST: Look for gums made with stevia, a nonsynthetic, zero-calorie substance, instead of artificial sweeteners.

When the endgame is fat loss, the sugar in fruit can thwart the plan. It might be natural, but that doesn’t mean it can be considered a free- for-all food while dieting.

WHY IT’S BAD: Fruits contain the natural sugar fructose, which can become another hurdle to burning off bodyfat if eaten without restraint.

HOW IT’S BAD: Fructose cannot be used directly by the body for fuel. It must first go to the liver and be converted to glucose. That is one reason why fruit is usually a low- glycemic carb that does not rapidly raise blood glucose and insulin levels. However, if the liver is already full of glycogen (the storage form of glucose), it will not convert fructose into glucose; instead, it will convert it into fat!

AVOID THE BUST: There is no substitute for fresh produce, so do not purchase processed, packaged or canned fruit instead. These products are typically saturated with even more sugar and should — along with fruit juices — be avoided.

The potential of leaving a Texas-sized brown stain on your pants aside, this syrupy substance also has the ability to muck you up when it’s time to sport the posing trunks.

WHY IT’S BAD: Barbecue sauces contain sugar or molasses. When looking to get leaner, a little is OK, but not when dieting for competition.

HOW IT’S BAD: Sugar from molasses or high-fructose corn syrup. while dieting causes an insulin spike, triggering the body to power down its fat-burning engine.

AVOID THE BUST: Hit the sauce — the hot sauce, that is. Hot sauces are normally vinegar based and there’s no need to monitor intake as closely.

When it comes to soft drinks — even “no calorie” diet sodas with the words “zero” and “light” attached to the brand name — it’s best to kick the can. Too much will cause your diet to fizzle.

WHY IT’S BAD: Mimicking the taste of sugar with lab-created sweeteners might fool your palate, but it won’t fool your diet, and it still has the capability to impede fat loss.

HOW IT’S BAD: The “diet” formula contains non-nutritive sweeteners, such as aspartame, which can lead to serious health-related issues, according to Rambod.

AVOID THE BUST: Fill up the Brita and pour a glass of water

Despite being a good source of protein and monounsaturated fat — the “good” fat — peanut butter can still put your diet in a sticky situation, especially if you’re eating the wrong types.

WHY IT’S BAD: Processed peanut butter adds extra sugar and partially hydrogenated vegetable oil (trans fats) to improve flavor and make it easier to spread on sandwiches. Unfortunately, what ends up getting smothered along with the bread is the nutritional value.

HOW IT’S BAD: Too much peanut butter will trigger the body to burn the monounsaturated fat instead of bodyfat.

AVOID THE BUST: Go straight to the source — peanuts. Grab a package of almonds or unsalted peanuts and enjoy a different, crunchier texture while reaping the same nutritional benefits natural and organic peanut butter can offer.

7 EXERCISES TO SCULPT AN HOURGLASS FIGURE