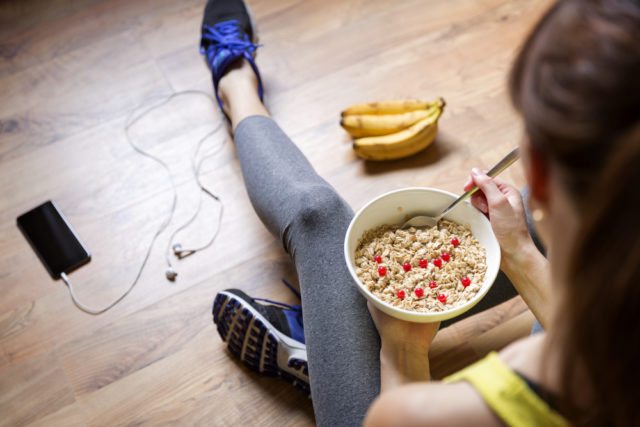 If you’re on a workout program to get stronger and improve your overall fitness, you probably know the basics of eating to fuel your workouts. and recovery. But aside from diet .no-brainers like avoiding the drive-thru and taking it easy on the alcohol, there are plenty of nutritional tactics to learn that can keep you moving forward on you quest to get stronger than ever.

We’ve done the research and compiled six diet rules to get you closer to your strength goals. Click through to check them out.

A study from the University of Connecticut (Storrs) compared the standard diet of 0.4 gram of protein per pound of bodyweight (what the Institute of Medicine deems an appropriate amount for the average person to eat), a strength athlete’s diet of 0.8 gram per pound and a high-protein diet of 1.6 grams per pound. When subjects ate the high-protein diet, they had greater nitrogen balance, which is an indicator of how much protein is being stored in the body. And if that body belongs to someone engaged in a weight-training program, that protein gets stored as muscle.

Eat a minimum of 1 gram of protein per pound of bodyweight per day. For a 145-pound woman, that equals at least 145 grams of protein daily.

Okay, so you can’t feast, per se, but adding a decent amount of certain fats to your diet has numerous benefits. For one thing, mono- and polyunsaturated fats are associated with cardiovascular health, but more important, new research indicates that strength-trained women use fat differently than men. It’s no secret that women store fat more readily than men do, but according to a review of related research published in the British Journal of Sports Medicine, women actually burn fat more readily than men as well. Whereas our brothers over at Muscle & Fitness are always having to burn through their glycogen stores (the stored form of carbohydrate your muscles use for fuel) before triggering fat-burning, female bodies, it seems, will actually burn fat first to spare glycogen. This has major implications for what you, as a woman on a strength-training program, should eat.

While sports nutritionists promote a high-carb intake for athletes, that’s really ideal only for endurance athletes such as marathoners. For the purposes of gaining strength, however, the opposite is true. Strength athletes should, as the review says, “put less emphasis on a very high carbohydrate intake and more emphasis on quality protein and fat consumption,” with the majority of your calories coming from lean protein and healthy fat sources. Furthermore, the heavier you train, the more pressure you put on your joints, and healthy fats are critical to joint health.

Yes, we did just tell you to emphasize protein and fat in your diet, but that doesn’t mean you should cut out all carbohydrates. Even though your body will preferentially burn fat during workouts, that doesn’t mean it won’t burn through some of your glycogen, and you have to eat some carbs to replace it. In fact, carbs are an important part of a strength athlete’s diet. Researchers at Loughborough University (England) found that when athletes ate slow-burning carbs for breakfast and lunch and then exercised, they burned more fat both throughout the day and during exercise and maintained lower insulin levels than those who ate fast-burning carbs. There are exceptions to this rule, but for the most part the carbs you eat should be of the slow-digesting variety—whole grains (brown rice, oatmeal, whole-wheat bread), legumes, sweet potatoes and fruit.

Eat 1-1.5 grams of primarily slow-digesting carbohydrates per pound of bodyweight per day.

4. Fuel Up Before Working Out

Study after study has shown that ingesting a combination of protein and carbs before (and after; see slide 5) a workout leads to increased muscle mass and strength. One study, conducted at Victoria University (Australia), showed that subjects who consumed a protein-carb mix immediately pre- and post-workout had greater muscle mass and strength increases and even dropped more body fat than subjects who took the same supplement more than five hours before and after training.

Clearly, the two important factors of pre-workout nutrition are timing and, of course, the contents of your plate. Or make that, shake. Right before you train you want fast protein (to immediately provide your muscles with amino acids to work with) and slower carbs (to fuel your workout over a longer period). Whey is always a great protein choice, but as for carbs, try orange juice one day and, say, a whole-wheat English muffin the next. Just remember that if you choose whole foods, you have to get them down early enough to allow for digestion before you hit the gym.

Eat 20 grams of whey protein and 20-30 grams of slow-digesting carbs within a half-hour of training.

Remember those Australians who supplemented with protein and carbs both before and after workouts and experienced stellar gains in lean body mass and strength? Note the “after” in the previous sentence. Much of post-workout nutrition is just pre-workout nutrition redux, with one difference: The rule of thumb here is speed of carb digestion.

Mainlining carbs after training serves to goose your levels of insulin, a hormone that has enormous effects on muscle mass because it ushers protein into muscle cells (yes, that’s why you also have to consume protein at this time). Any fast carb goes, but watch the fat content. Fat slows carb digestion and absorption, so choose low-fat simple carbs like angel food cake, jelly, white bread—things mainstream nutritionists would tell you to steer well clear of.

Eat 40 grams of whey protein and 30-40 grams of fast-burning carbs immediately after workouts.

Most people carry around a water bottle (or at least make frequent trips to the water fountain) while working out. But how’s your fluid intake when you’re not at the gym? That could be when it really counts. The body’s thirst mechanism isn’t particularly sensitive, which means that by the time you physically feel thirsty, you’re likely already slightly dehydrated. And dehydration spells bad news for strength gains. Research involving athletes who experienced minor dehydration demonstrated significant loss of muscular strength and power. The only cure is prevention, so make sure you’re sipping on something throughout the day.

The Institute of Medicine recommends that women get 11 cups (not glasses) of water per day. That doesn’t have to come from an Evian bottle, either. Water is in just about everything you drink (coffee, tea, sodas) and is especially high in fruits and veggies, and it all counts toward your daily total.

HOW COFFEE CAN HELP YOU LIVE LONGER

THE BEGINNER’S GUIDE TO CLEAN EATING

WHY EXERCISING WITH YOUR PHONE IS RUINING YOUR WORKOUTS