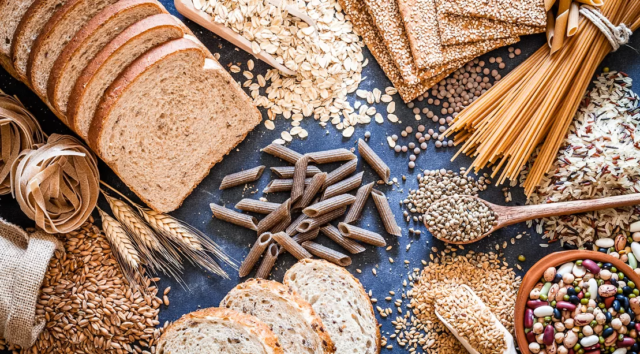 If you want to lose weight, following a low-carb diet could yield better results than following a low-fat diet, according to new research out of Tulane University, published in the Annals of Internal Medicine journal. The study followed 148 obese patients for a year who were following either a low-fat diet, where less than 30 percent of daily calories came from fat or a low-carb diet, where they consumed less than 40 grams of digestible carbs per day. After a year, the low-carb dieters lost nearly eight pounds more than the low-fat group, and also improved their cholesterol numbers.

But the truth is, carbs aren’t all good or all bad. Some promote health while others—when eaten often and in large quantities—can pile on the pounds and increase your risk for disease.

If you’re a hard-training female, carbs should comprise 30%-40% of your daily caloric intake. Skimping on carbohydrates—most of which should come from slow digesting sources such as brown rice, grains, oatmeal, veggies and yams—can actually cause you to lose muscle. Carbs form muscle glycogen, the fuel for strenuous training, and when these stores are depleted the body turns to its own lean tissue for fuel.

Sugar-laden carbohydrates such as doughnuts, sodas and other highly processed foods may indeed kick-start weight gain and interfere with your ability to reach your physique goals. But sources such as fruits, oatmeal, vegetables, wholegrain breads and other varieties of intact carbs do just the opposite when eaten in moderation: They promote good health.

2. Choose Slow-Digesting Carbs for Most Meals

By eating slow-burning (low-glycemic) carbs, you not only stave off catabolism but also keep blood-sugar levels in check, which helps offset fatigue while preventing insulin spikes. Research shows that athletes who consume slow carbs have more energy during workouts, and burn more fat as they train and the rest of the day. Choose complex carbs such as brown rice, fibrous vegetables like broccoli, fruit, oatmeal, sweet potatoes and whole grains.

3. Start Your Day with Slow Carbs for Breakfast

Breakfast is a good time to refuel your body with slow-burning carbs. Following an overnight fast, blood-sugar and muscle-glycogen levels are low, and your body must replenish them. Research also shows that by consuming carbs along with your protein first thing in the morning, your body is less likely to stimulate fat storage. In a study at Virginia Commonwealth University (Richmond), researchers compared the diets of 94 obese, physically inactive women. Subjects were divided into two diet groups, both of which were low in fat and total calories but differed in carbohydrate distribution.

A more recent study published in the International Journal of Obesity showed that mice eating a large breakfast were likely to lose weight as long as breakfast was high-carb and high-calorie, and smaller meals were eaten for lunch and dinner. Aim to get 20-30 grams of slow-digesting carbs at your first meal of the day.

our pre-workout meal should supply slow carbs from sources such as brown rice, fruits, vegetables, and whole-grain breads, cereals and pastas. Complex carbs take longer to convert to glucose, which will keep blood sugar levels in check and prevent you from crashing in the middle of your workout. It also keeps insulin levels low, so it won’t interfere with fat-burning as you train. During strength training workouts, take in 20-30 grams of slow carbs along with 20 grams of protein from a protein shake.

The carbs you ingest immediately after a hard training session should be of the fast-digesting variety. Postworkout, these carbs are less likely to be stored as fat since they’ll be used to restock depleted glycogen levels. A number of studies have found that a postworkout meal containing fast carbs and protein dramatically increases muscle-protein synthesis, the process that results in muscle recovery and growth. These carbs will bolster insulin levels and help drive much-needed amino acids into your muscles so they can start to recover (and grow) while fending off cortisol, a muscle-wasting hormone. Go with 30-40 grams of fast-digesting carbs such as a baked potato, dextrose, a plain bagel with jelly, Vitargo or white bread along with 40 grams of protein from a protein shake.

Cardio training burns both fat and carbs, so the fewer carbs and less insulin you have in your bloodstream before hitting the treadmill, the more fat you’ll shed. Contrary to popular belief, however, cardio on an empty stomach isn’t the most effective means of burning fat. Research also shows that fat-burning can be enhanced if you take amino acids before cardio exercise. Swap the carbs for a half scoop to a full scoop of whey protein before your cardio session to push fat-burning into high gear.

Skipping carbs and opting for a protein only shake following an arduous cardio session can put a slow grind on your body’s recovery efforts. As with weight training, downing some fast carbs along with your protein after cardio exercise will replenish depleted glycogen stores, boost insulin and help force more repair-boosting nutrients into your damaged muscles. Consume 20-30 grams of fast-digesting carbs post-cardio.

Bumping up your carb intake every so often helps maintain leptin levels and triggers a release of thyroid hormones, both of which tend to plummet when carbs are low for an extended period. By consuming more carbs on your cheat day, you ramp up these hormones and keep your body in fat-burning mode. Depending on your size, physique goals and how many carbs you eat daily, increase your carbs to as much as 2-3 grams per pound of bodyweight on a cheat day. To prevent fat gain, stick to one cheat day per week.

9. Taper Your Carbs as the Day Progresses

As the most readily available source of energy, carbs are necessary early in the day when your body’s primed to use them for fuel. Later in the day, however, you need less energy from carbs and research shows that insulin sensitivity is reduced. That means it takes more insulin to get carbs into your muscle cells, resulting in a greater risk of body fat storage. Cut carbs as the day progresses and you’ll be less likely to store fat.

GAME PLAN FOR STAYING FIT OVER 40