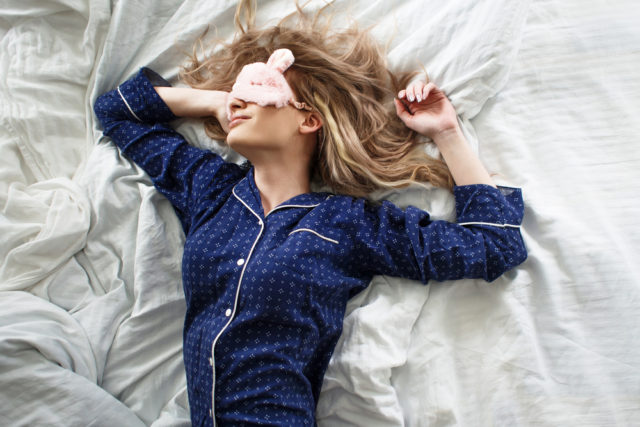 Your body is always burning calories to keep your involuntary nervous system working—pumping blood, breathing, digesting food, and all the other life-sustaining jobs it performs. You’ve probably already heard that the more muscle mass you have, the more calories your body is burning at rest, but did you know that you could also burn calories and fat while you sleep? With some minor tweaks to your daily habits, you can unleash the full potential of your body’s natural fat-burning ability while you sleep.

Follow these simple suggestions from nutrition and health experts to maximize fat burning while you snooze and improve the overall quality of your sleep.

While not as lauded as its green counterpart, white tea, which is derived from the same plant as green tea, is packed with antioxidants and health benefits, including fat loss. Studies have linked white tea extract to inhibiting cells from becoming fat and stimulating fat breakdown. Swap your morning cup of Joe for a cup of white tea, suggests Molly Morgan, RD.

2. Eat Your Carbs During the Day

Consume the bulk of your calories, particularly carbohydrates, during daytime hours and less in the early evening. You’ll go to bed with less of the hormone insulin in your blood, so your body can metabolize fat for energy while you sleep

3. Chug a Protein Shake at Night

Shake up a protein drink if you feel hungry in the evening. Several studies have found that protein before bed not only helps you build lean muscle mass, but also aids in muscle and cell repair.

Try eating foods rich in the amino acid tryptophan, which includes turkey, chicken, and eggs. This protein can help to promote relaxation and sleep. In addition, proteins cause the body to use more calories during digestion than carbohydrates, which may further improve the body’s ability to burn fat overnight, according to Erin Palinski-Wade, RD, CDE.

5. Make Your Room as Dark as Possible

Exposure to light before bedtime has serious implications for your health. Sleeping in total darkness releases the hormone melatonin, which helps regulate sleep, blood pressure, body temperature, and cortisol (the stress hormone) levels. A 10-year study found that women who were excessively exposed to light at bedtime were 22 percent more likely to develop breast cancer, while another study linked bedtime light exposure to higher rates of depression (which can lead to weight gain).

Melatonin also assists in the production of “brown fat” which is key in metabolizing calories, so shut off your electronics an hour before bed and make your room as dark as possible while you sleep.

“Stay hydrated!” advises Palinski-Wade. “Drinking at least eight cups of water a day has been shown to boost metabolism. In addition, ice-cold water requires your body to use more calories to heat it to body temperature, providing you an added metabolism boosting benefit,” she says.

“One handful of walnuts and almonds can increase your melatonin levels and promote better sleep,” says Dr. Robert Oexman, director of the Sleep to Live Institute. They’re also good for your heart.

8. Spice Up Your Meals

Up your consumption of cayenne pepper, red pepper flakes, and other types of hot peppers to aid in thermogenesis (fat burning), says Palinski-Wade. “The capsaicin found in these foods has been shown to have a thermogenic effect, helping your body to burn more calories and fat,” she says.

“The key to fat loss is not only to burn it or get rid of it, but also to stop making it,” says Robert Zembroski, functional medicine doctor and clinical nutritionist. “One of the fastest ways to get rid of body fat is to prevent surges of insulin at night, which will take unused calories and store them as fat. If you have to eat at night, choose a piece of lean protein and a side of salad or greens that will prevent big surges of insulin.

By doing so, you increase the amount of growth hormone released after you fall asleep, which will cause the fat cells to release their fat to be used for energy,” says Zembroski.

HERE IS WHY WOMEN ARE BETTER DISTANCE RUNNERS

IS HONEY AN EFFECTIVE PRE-WORKOUT SNACK?