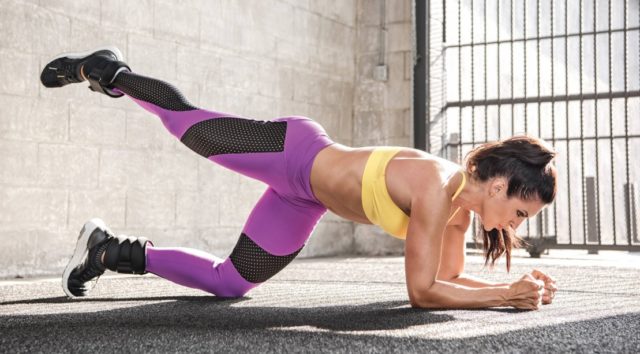 If you’ve ever met Amanda Latona Kuclo, best known as the Booty Queen, you’ve realized one thing right away: This girl has fun with life. On set, Kuclo is singing to the music, laughing, and staying relaxed. Joy motivates her to work harder.

“I’ve always been a hard worker,” she says. “I’m not a diva in any way. I picture the outcome and think, ‘Let’s get the shot and have fun with it.’ Because to me, it is a lot of fun. You work hard, you train hard, and having fun on set will come through in the images. I shot my first cover in 2010 for Muscle & Fitness Hers, and since then the magazine has been nothing but supportive.”

You could easily say that Kuclo has always been a natural in the spotlight. Her first most notable obsession that put her onstage was singing. At age 18, she was in a girl band called “Innosense” alongside Britney Spears (just before Spears reached stardom).

Kuclo’s musical career didn’t end up being her bread and butter, but doing her best for an audience has been an enduring ethic. She fell in love with fitness when she was still singing, and it was only a matter of time before she stepped onstage as a competitor. After years of dedicating herself to the weight room, Kuclo (then Latona) earned her IFBB pro card in 2009. For more than a decade, she clinched more than 25 first-place fitness and bikini competition finishes—10 of those IFBB championships. Since then, she keeps expanding her fit-fluence—inspiring others who want to follow a fit, healthy lifestyle—and she became a Team AllMax-sponsored athlete.

Ask which is her favorite butt exercise, and she’ll say all of them, but here is her exact plan for how she strategizes her glute training. Your booty can be made tighter and rounder with her five key tips.

“It’s super-important to incorporate a variety of angles into your training program and to do different reps and vary your weights and machines.” If you’ve found yourself on one surface or tool too long (say, four sessions or more), it’s time to switch it up. Same thing with your rep schemes. Start incorporating rep variety like rest-pause, dropsets, etc.

And go heavy. “I’m a big believer in heavy lifting. But incorporating lighter reps, bodyweight movements, and plyometrics is also key when you’re training.” Her most important weight tip: “Use tools and do moves that isolate the glutes so you can go heavier on them. Exercises like the barbell hip thrust, banded hip thrust, and glute kickbacks are great examples of isolation moves I love.” Of course, classic compound moves have a firm place in her regimen as well, but they also require variety. “If you just do a squat, a leg press, a stepup, and a lunge, your plane of motion has been only up and down—not side to side or diagonal. You have to hit your abductors with moves like walking lunges, reverse lunges, and curtsies to hit different parts of your glutes and get that roundness. And do a good active warmup using bands or unweighted squats. If you do moves like squats with weights that are so heavy that you essentially can’t feel what you’re working, you may miss your glutes altogether.”

“A lot of times women will ask, ‘How do you build your glutes without getting your quads bigger?’ For a lot of women, their legs will just blow up doing common glute exercises.” Kuclo says it’s mostly trial and error—you can’t write off one tool until you’ve figured out what works best for you.

“For cardio, if I go on the stairs, I notice that my quads pop [and not in a good way] just like that. But if I do an incline treadmill, I’m still hitting the glutes without putting a lot of weight on my quads.” To avoid big quads, skip cardio with added resistance, such as spinning or climbing stairs with weights. Foot placement is also key, she adds. “You can change where a move hits your glutes just on your stance. Feel around for what works best for you.”

“I have a T-shirt that says, ‘I only train glutes on days ending in Y.’ But that’s not actually the case!” she jokes. “If you’re giving everything to that workout, then two days is sufficient. There is such a thing as overtraining. You need time to grow. Outside the gym, the gains come with proper nutrition and rest. More is not always better.”

“My body-part split is four days a week weights. Upper body, back, abs, lower body, and then a rest day or a cardio-only day. And then I would do another lower body and a shoulders/arms/abs day. “This year, I’ve split up my glute days to do a glute day and a ham/glute day, and I’ve noticed a big difference in my hamstrings. For ham/glute day, I’ll do moves like stability ball curls and stiff-legged deadlifts. My glute day is more arms/abs day. I keep it varied and always have a written plan before going into the gym.”

5. Switch up your sets and reps

“There’s not a golden number of sets or reps—you have to mix it up. I personally like to do four sets, but I’ve also done 10 sets of hip thrusts, five heavy and five lighter. My base is built on a 10- to 12-rep range. I like higher reps mainly with plyos and bodyweight, but with weight I’ll get into higher reps by using dropsets and rest-pause. If I’m doing stiff-legged deadlifts, for example, I’ll rack several smaller plates so it’s easier to drop down.”

“I’ve always wanted to make women’s leggings because I love them myself. I don’t even wear jeans anymore!” Being CEO of her own business is different from anything else she’s ever accomplished. “With apparel, you’re always doing 15 things at once, and there are a lot of things out of your control. Manufacturers, deadlines, things that you order that don’t come in right or have the wrong colors or sizing. And then there’s customer service—you want to make people happy!”

Her secret savior: Her husband: “The good thing about it is that I’m with my husband [IFBB pro bodybuilder Steve Kuclo], and we do this together. We both have the same vision for this and the Kuclo Classic Bodybuilding and Fitness show that we run. If we have a challenge, I’ve learned to change my mindset. Instead of being negative, I say to myself, ‘OK, we’re going to get through this. How do we learn from this and keep it from happening again?’ For example, we frequently run out of our leggings, which is amazing because it means women love them, but we need to learn how to turn that into a positive.

“The Booty Queen apparel line and lifestyle website is taking the experience of my life and putting it into a brand that motivates women to love themselves and embrace their curves.” Everyone can get fit, she says, “you just have to make it work for your lifestyle.” Her goal is for women to make small changes—like watching their blood sugar, eating whole foods, and training in order to be healthier. “Weight training will help your body come into its natural shape so you can enjoy your life more, look better, and feel better while you’re doing it.”

ALICIA VIKANDER PUT ON 12 POUNDS OF MUSCLE FOR ‘TOMB RAIDER’. HERE’S HOW SHE...

SWEAT TO GET HAPPY

THE BEST EXERCISES TO GET RID OF YOUR LOVE HANDLES