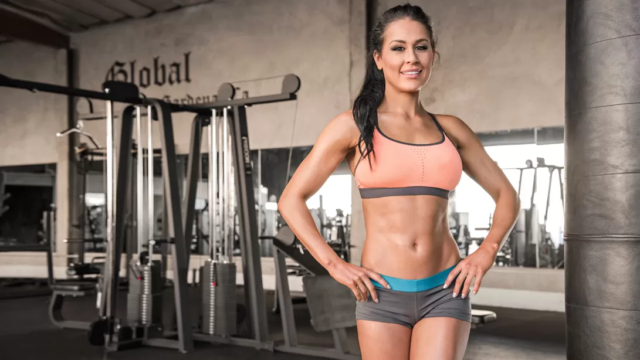 Editor’s note: This article was originally published in 2016.

Since the bikini competition category was established at the Olympia in 2010, Ashley Kaltwasser has stood at the top spot three times in a row, becoming the first rookie to take the title in 2013. And she’s aiming to keep her streak going. “My goal is to take home the title of Ms. Bikini Olympia for the fourth time, so I’ll need to come in with my best appearance yet!” she says. Kaltwasser has dominated the bikini division since her first competition in 2011. Since then she’s gone on to place first in 14 IFBB pro events. But this year’s Olympia will be her first time back onstage in 2016. “I decided to take a much longer off-season after winning last year,” she notes.

Kaltwasser’s competitive streak dates back to her youth. Growing up in Akron, OH, she started competing in gymnastics at age 4. She switched to track and field in high school, where she broke seven records for track and set a record in cross-country. Kaltwasser began training in 2011 and found that she was instantly drawn to the world of competitive fitness.

She emphasizes that a competitor’s diet doesn’t have to be miserable. “I believe in eating tasty foods during prep,” she says. “If you don’t like a certain food in your diet, then just make a substitution.” At prep crunch time, she’ll typically remove additives like almond milk, coffee creamer, and other condiments and cut down on any extra food nibbling while making an effort to increase her water consumption to at least 11⁄2 gallons a day. To help fight cravings, she’ll snack on sliced cucumber with stevia or have some decaf iced coffee sweetened with almond-flavored liquid stevia drops or cinnamon-apple tea and stevia. When all else fails, she pops some sugar-free gum.

Kaltwasser hopes her hard work and dedication will pay off but acknowledges she’s had to adapt to the sport as it continues to grow. “The sport of bikini is always changing. If you take a look back at the first few years, it looks nothing like what’s being rewarded today,” she says. “The bikini styles, posing, and body types have definitely advanced! I have to improve each and every year to keep up. But I love it!”

But time off doesn’t mean time away from the gym. “Taking a break from competitions has allowed me to focus on lifting heavy and not having to constantly prep.” Kaltwasser trains six days a week, including five days of strength and three days of cardio. Like everyone else, she has good days and bad, but she uses the down days as motivation to keep her going. “There will always be times when you don’t feel like hitting the gym—but those are the days you make the most improvements!” she notes. “Attitude is a powerful thing, and you have to learn to strengthen the mind as well as the body.”

*Cardio is 20 minutes of high-intensity interval training, usually on a Stepmill, elliptical machine, or treadmill