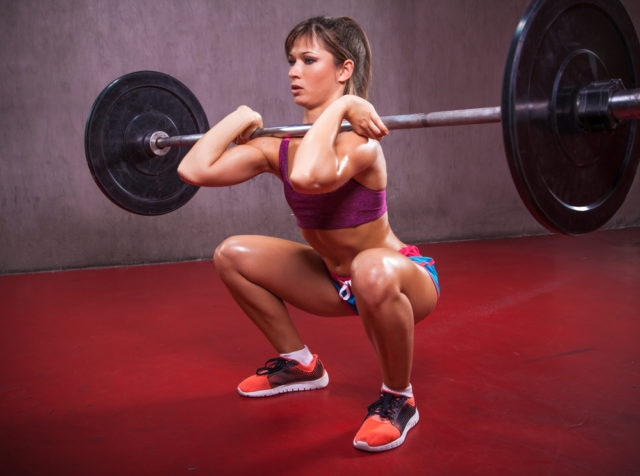 A female presence in the gym used to mean Lululemon-clad women bound to treadmills and ellipticals, bopping around in Zumba classes or stretching languidly in hot yoga.

Rather than slimming down to Victoria’s Secret-sized proportions, more and more women are gravitating toward building curvature from muscle — and that’s not all, fitness lifestyle coach, personal trainer and UFC gym coach Jaclyn Sklaver says:

“Same levels” meaning women are challenging their male counterparts or, rather, meeting their established standards, their exertions, and their feats. CrossFit is a huge part of that. Women are able to execute Olympic lifts, which were really only performed by bodybuilders and physique competitors in the past, Sklaver says.

Fitness has become a goal of getting stronger rather than working out to lose weight or to be beautiful, Sklaver adds, helping to reverse old stigmas that women should be toned, but never jacked. Having women of influence like 2014 Crosfit Games winner, Camille LeBlanc-Bazinet, merging ideas of strength and beauty helps too.

Likewise, categories for women in the world of fitness have grown to match the rising interest, and to make the process a bit easier. Gold’s Gym, for example, has women-only workout areas since women make up 48 percent of their members, assistant account executive at MWW, Erika Satler, says.

Fitness competitions have become popular, too, especially with the presence of social media, Sklaver says. It’s exciting for women to post PRs and to belong to a supportive community. Sklaver’s also seen women begin as ‘bikini’ competitors before switching over to ‘figure’ once they see their body changing.

Some fitness facilities even feature simplified classes; for example you can do CrossFit sans the Olympic lifts, Sklaver says. You’re still building muscle and working with kettle bells, weights, and suspension trainers, you’re just easing into the components rather than being thrust into the box feeling helpless and uninformed — just how a man would feel stepping into a yoga studio for the first time. It’s daunting.

The fear of being the lone pioneer forging into unchartered territory is enough to avoid a class or the gym altogether. Asking for help seems to be one of the largest obstructions preventing women from using equipment other than a treadmill. Most of the women Sklaver works with come from the dance cardio side of things; they don’t know what to do if they’re not being instructed step-by-step. But they want to learn, and that’s enough because knowledge has been a major catalyst feeding this progress.

Women (well, most women) know it’s going to take more than 10 pounds and a few weeks of weight training to turn them into some Herculean figure overnight. They understand that weight lifting helps their body burn fat and transforms their figure in ways cardio can’t — even if their goal isn’t to build maximum muscle mass.

In a way, fitness for women has simply caught up to fitness for men. It’s a lifestyle, it’s a reprieve, and it’s a way for women to surround themselves with women who have the same goals. More and more, women are using the gym as a communal outlet.

“They’re not necessarily working out together, it’s just like guys,” Sklaver says. “They just meet up at the gym. They’re not holding each other’s hands. They might share ideas, but it becomes kind of a social thing for them to do rather than going to a bar.”

With this being said, weight rooms are still lacking a heavy female presence.

“I’m still one of the only women,” Sklaver says. “I love when I see another woman going hard. It’s so inspiring, and it motivates me. I’ll watch that woman while she’s working out, and push myself a little big harder.”

Driving the competitive edge of contests, the communal aspect of specialized classes, and the support intrinsic to social media may be enough to keep the trajectory of women in strength training moving forward. What do you think it’ll take?

4 TIPS TO GET BEAUTIFUL SKIN