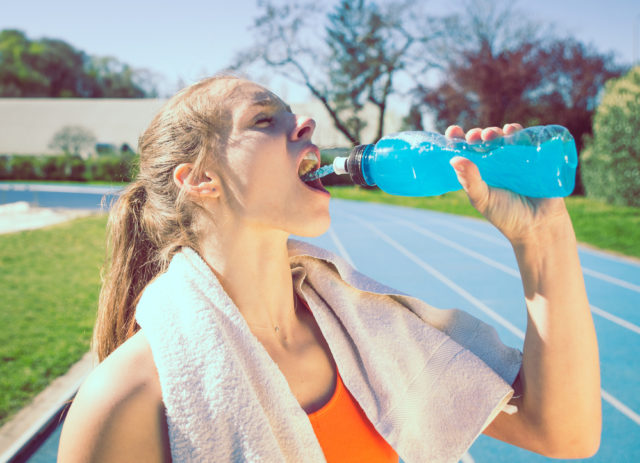 You’ve probably sipped on an electrolyte-replenishing sports drink during a workout at one point or another. But have you ever stopped to think about what electrolytes even are, or whether you actually need to supplement with them at all? Here, we break it down for you.

Put simply, electrolytes are salts—including table salt—that conduct electricity in water by separating into positive and negative charges. But contrary to what many people tend to think, that doesn’t mean electrolytes are synonymous with sodium.

“[Sports dietitians] talk about electrolytes and sodium, then athletes and coaches use those words interchangeably—but that’s not actually correct,” Lauren Antonucci, sports dietitian and owner of Nutrition Energy in New York City, explains. “Sodium is just one of the electrolytes. There are others that are responsible for different things—most people have heard of potassium, magnesium, and calcium, for example.”

Each electrolyte serves a different function in the body, keeping processes like nerve conduction, muscle contraction, and fluid balance running smoothly, according to Antonucci. All of them are important, but in reality, most athletes only need to worry about sodium while working out, because it’s the main electrolyte we lose through sweat. (If you’ve ever noticed white, chalky residue on your skin after sweating, you’ve seen it happen.

“The amount of other electrolytes lost in sweat is pretty small, and if an athlete is eating enough of them during their normal day, the only thing they’d need to think about would be sodium,” Antonucci says. But as far as supplements go, her recommendation is to replenish only what you need to while you work out.

First and foremost, that means drinking water. Then, if you start to break a sweat, cramp up, get dizzy, or feel fatigued, add some salt. Electrolyte tabs, salt tablets, salt packets, and ready-to-drink sports beverages are solid options if you need to replace electrolytes during an average workout. But if you opt for a sports drink, be wary of the calorie count.

During a 45- to 60-minute workout that doesn’t leave you sweating profusely or completely exhausted, you probably don’t need extra calories, Antonucci says. She suggests finding a drink with about 10 calories or less to replace water and salt during those workouts.

If your workout is super intense, includes serious endurance training, or you’re doing double sessions, you may want to reach for a sports drink with some extra carbs (sugar), or even a little bit of caffeine. If your sports drink has any more than those simple ingredients, you’re probably going overboard—and paying more.

“Anything promising you too much, I’d be leery of,” Antonucci adds. “And it shouldn’t be expensive. Water and salt are pretty cheap, so that’s the basic cost of a sports drink. If there’s one that’s more expensive and promises the moon and the stars, leave it on the shelf.”

HOW TO CURB YOUR SWEET TOOTH TEMPTATIONS

THE HIDDEN DANGERS OF DIETING