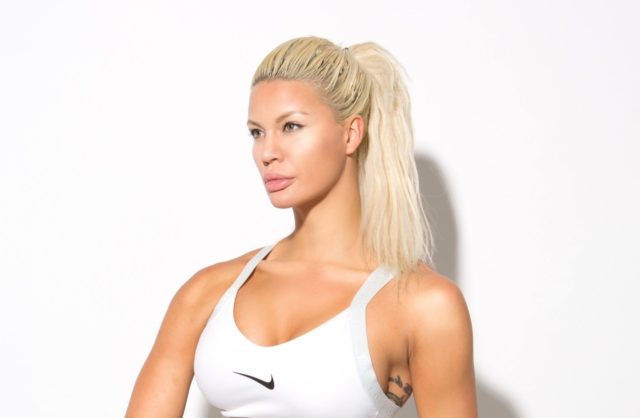 Cheyenne Lutek was born and raised in rural southern New Jersey and is now based out of Los Angeles, California.

At the age of 18 she moved to New York to pursue her career in modeling and acting and graduated from the New York Film Academy acting program.

She is an avid world traveler and speaks fluent Italian after also having had a residence in Italy for 5 years.

Some of her accomplishments include being published on MAXIM, Muscle and Fitness, Playboy Esquire, 6 magazine covers, and many other online and print publications around the world.

Cheyenne can almost always be found with a book in her hand and further to her love of literature, she is about to publish her first novel, an alternate history novel based in ancient Rome.

Cheyenne, also posing as a fitness model, was crowned the 2012 NJ State Champion for discus in track in field.

2020 is a big year for Cheyenne because she just got signed to play professional football for the Los Angeles Black Storm! You can check her out playing wide receiver at home on your TV!

Cheyenne, you’re both an athlete for the Los Angeles Black Storm and model, how did you make the transition and what is your current background in both?

I never had the strength when I was younger to become an athlete — yet I did.

I never had the confidence or the “body type” to become a model — yet I did.

I dropped out of college and everyone told me it was impossible to move to and live in NYC at 18 years old without a degree — yet I did.

Everyone doubted me, yet I STILL DID IT.

My main advice to someone looking to pursue their dreams, is TO JUST (FXN) DO IT!

My background in sports:

I’ve been an athlete since a young age (thanks mom and dad!)

I played 11 years of soccer (go Pittsgrove Red Rockets!) and I am endlessly grateful to my coaches and those who supported me throughout the years, because thanks to them I was able to eventually become a discus State Champion in high school.

I got a full scholarship to college but dropped out to pursue other dreams.

And since college, I have missed having teammates and have continued to play recreational sports, including recreational football.

The league I play for now? I have been emailing with them since 2013 hoping they may possibly expand to include a New York team (as they had the very first year of inauguration which was called the New York Majesty.)

When I decided to make a cross country move to LA, my first thought was to immediately try out for the team!

What has your experience been like as a pro-athlete in 2021? What’s the most exciting thing about playing in the league?

Unfortunately when I got signed to the team in 2020, it was a bad year for us, as our season was cancelled due to the unfortunate event of Covid happening, but I know that I speak for myself and the entire team, as well as the league when I say that we are ALL very much looking forward to 2021, as it is the inaugural year of the X League!

The X League is a newly founded league, striving to shine a light on women’s american football and women’s sports in general. The focus of the X League is to provide the highest platform of women’s football; to be a platform that little girls can aspire to play on.

For me, that means being a part of a movement. To be a role model. How much more exciting can it get?!

What are some of your proudest accomplishments in both modeling and sports?

MODELING- Many magazine features and covers; among them Playboy, Esquire, MAXIM, and now the best (obviously) being Muscle and Fitness!

Are you currently following any diets and do you have any dietary restrictions?

WOW! Diet. Such a personal thing.

I feel like everyone should experiment with different methods to find out what works best for their individual bodies because not every single body works the same way.

Based on your lifestyle and fitness goals, something completely different can work for you.

I, generally try to exclude excess sugar, gluten, dairy, though I do still eat the occasional PIZZA and ICE CREAM! YUM! (Cheat days are the best days)

If I have to prep for something like a photoshoot, I have an entirely separate dietary routine, which is much more specific.

I’m always pointing out to people different types of body training (and in turn, eating habits) — in general, bulking and cutting.

When it comes to modeling, I want to be VERY specific when I talk about “cutting” calories and getting into the “cutting phase.”

I was shunned for having a “bigger” size in the beginning of my modeling career, and told to “lose weight” but I want to reiterate the fact that there are SO MANY accepting agencies who accept YOU for who YOU are.

So when I say “cutting” I mean editing ones food choices to less carb-based options in order to tone up and define. During this period I also include more days of intermittent fasting. (The 16/8 rule of eating only during an 8 hour period in a total of 24 hours.)

I switch the weights for more cardio time when I want to tone up for modeling.

Since I play wide receiver in football, speed is important as my position entails a lot of running, so I implement a lot of sprints into my regime during football season.

BOTH football and modeling work hand in hand to keep my butt in shape year round! 🙂

It’s nice having a consistent timeline of goals in mind so I have a reason to push myself.

What’s a mantra you live by in sports and in day-to-day life?

“I broke up with my fears so I could marry my dreams.” 😉

“You can’t let anyone disturb your composure, deter your accomplishment, or destroy your happiness.”

This next one I relate to a lot because I have built my entire life around this mindset:

“Instead of wondering when your next vacation is, maybe you should set up a life you don’t need to escape from.”

I have worked very hard to build a life around that which I love and those whom I love being around!

What advice do you have for other women looking to strengthen their bodies while also feeling feminine and sexy?

Any partner who says they can’t handle a strong woman (mentally or physically) then isn’t the one for you.

First, be the best YOU, and the rest will fall into place!

I always be sure to make “ME-TIME” each week.

I feel like solo time pampering myself is super important for my health, mentally and physically.

Some good R&R (rest and relaxation) is a necessity for everybody!

With these workout sets included below, I also included variations of cardio and sprints.

HOW TO TRIM UP LOOSE SKIN AND FLABBY ARMS

EVERYTHING YOU SHOULD KNOW ABOUT IT BAND SYNDROME