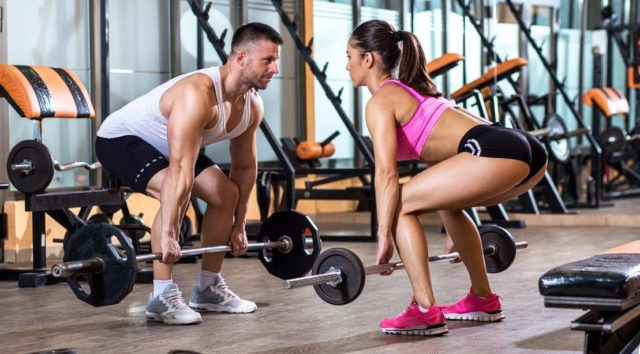 Valentine’s Day traditions are laced heavily with food. Fancy dinners, boxes of chocolates and those little, chalky message candies that last longer than most relationships. Sure, cheating (on your diet, that is) has its place but as a dedicated M&F reader, you’re more into year-round healthy living than week-long junk binges. So convincing your Valentine to hit the gym with you seems a logical date—or series of dates—for this time of year. But you have to play your cards right, says Greg Chertok, M.Ed., CC-AASP, a sport psychology consultant with Telos Sport Psychology Coaching. Working out as a couple can boost exercise adherence, or it can totally complicate things. To avoid the latter, take a closer look at the research.

Some people are thriving solo trainers—people who hit the gym everyday, without fail, grunting out each rep on their own. The solitude is somehow edifying. But others can benefit from a little “group” training.

“Exercise adherence seems to strengthen when two factors are involved: accountability and social support,” says Chertok. “And both factors are satisfied when working out with a buddy or partner.”

Download the 2017 M&F Starter’s Guide free on Apple or Android.

Chertok pointed out that this applies to electronic accountability partners like those made by FitBit. “Imagine how much more effective this becomes when it’s a living, breathing human beside you,” he adds.

“Studies do show that working out in groups increases exercise adherence over working out individually,” Chertok says. “A meta-analysis by Carron & Burke in 2005 found that exercising with others was superior for adherence in comparison to exercising alone. Also, Carron and his associates found that participation in classes characterized by higher task cohesiveness or higher social cohesiveness was superior to participation in standard exercise classes.”

Dragging your guy or girl out to the gym, then, may help the both of you stick to your chosen workout protocols—perhaps more so if you are doing the same workout.

Still, some couples may want so stray away from gym trips together.

“Sure, intimacy can be enhanced, as the same feel-good hormones and neurotransmitters that are released in response to physical exercise are released in response to sexual gratification. Plus, the idea of accomplishing something challenging together can be bonding. There’s the physical bond of collective hard work that may get men going and the emotional bond of working jointly towards a common goal, which would typically be more desirable for women.

“But in some relationships, partners appreciate that their partners adopt — and adhere to — certain roles. We thrive on have firmly established, consistent, and clearly-defined roles amongst those in our life. Some women, for instance, may desire that their man take a certain role with them: loving, caring, nurturing supporter rather than hard-nosed, loud workout buddy. I can certainly see some women saying or thinking, ‘Leave the exercise motivation to my trainer, you’re here for unconditional support.’  In fact, some men may feel that way about their women, too.”

“This is coming from a sport and exercise psychology professional,” he says, “but also from a married man!”

Cannon, A. & Burke, S. “Context and physical activity: The influence of others”, Sport & Exercise Psychology Review Vol 1 No 2, The British Psychological Society 2005 pg. 23-31).

GET COMPETITIVE TO SPARK YOUR MOTIVATION