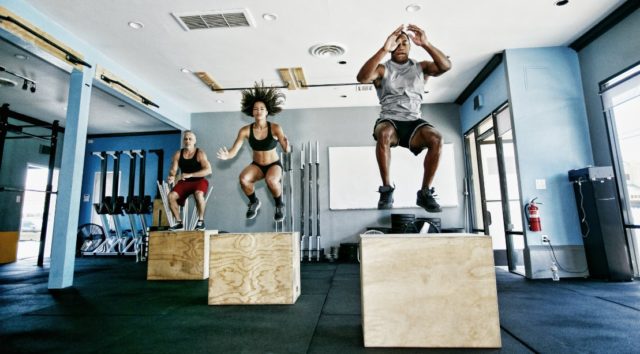 You’ve probably heard about plyometrics before. Most people think of them as workouts for athletes who want to run faster, jump higher, and improve general athleticism. And yes, research has shown that plyometric training can do that.

Even better: When done properly, explosive plyometrics can also help you lose weight.

“Higher heart rates occur during serious high-intensity work, and plyometrics can help with excess post-exercise oxygen consumption for hours or days,” says New York City-based trainer Steve Feinberg, a conditioning coach for pro and amateur fighters, creator of Speedball Fitness, and co-inventor of the SpeedBALL and HIPBOX. “The average woman can end up in EPOC sometimes for up to 16 hours, and the average man can be in EPOC for between 32 and 48 hours.”

If your intensity is high, you’ll probably be spent after 10 minutes—but your body will be working hard long after you wrap up in the form of an elevated resting heart rate. “You condition the body to just burn fat more often when you’re doing nothing,” Feinberg says.

But hang on: What exactly is a plyometric exercise?

Think of a standing high jump, Feinberg says. When you stop descending into the squat and start firing your legs to jump upward, that’s called the amortization phase.

“A true plyometric exercise makes that amortization phase as short as possible,” Feinberg says. “The second you finish executing the exercise as your feet or hands hit the ground, you go right back up into the explosive phase.”

Serious weightlifters spend too much time working in their sagittal plane, Feinberg says. The sagittal plane divides your body into left and right halves—things like overhead presses, biceps curls, squats, or deadlifts. Plyometric exercises that improve function and involve a lot of joints at the same time will also help with squat mobility.

“What lifters need more of is transverse or horizontal plane work, which is rotational and then any anti-rotational, things that resist rotation, and also things in the frontal plane like lateral-pelvic movements,” he says.

So: If plyometric workouts are so great, then what’s the best way to get started? Here are three key pointers:

Do 10-minute plyometric exercises once a week, and give yourself a few hours’ break between this and lifting sessions, advises Feinberg. “Do the exercises until you can’t catch your breath for three to five minutes following the workout,” he says.

This is especially the case “if you’re an avid lifter and have a very serious strength and conditioning program where your muscles are doing split work, and you’re under fatigue, and something is taxed all the time.”

Start with one plyometric workout using only bodyweight exercises for the first couple of weeks, and then you build up to two weekly workouts for the next two months.

Once you’ve got a three-month cycle under your belt, you can start to play with progressive variables, going up to the next levels of plyometrics to add challenges, suggests Feinberg.

Avoid doing plyometrics on concrete, which can seriously beat up your joints. A mat-covered floor, padded floor, or floor designed for aerobics is best.

Ready to take on a plyometric workout of your own? Hit that warmup hard and tackle these nine plyometric exercises to burn fat fast. 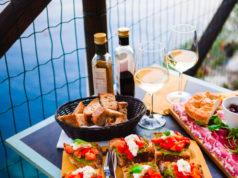 4 WAYS TO MAKE YOUR MEALS HEALTHIER AT A RESTAURANT

HOW YOUR MOUTH CAN BE AN INDICATOR OF BRAIN HEALTH

THE CARBS THAT MAKE YOU FEEL DEPRESSED