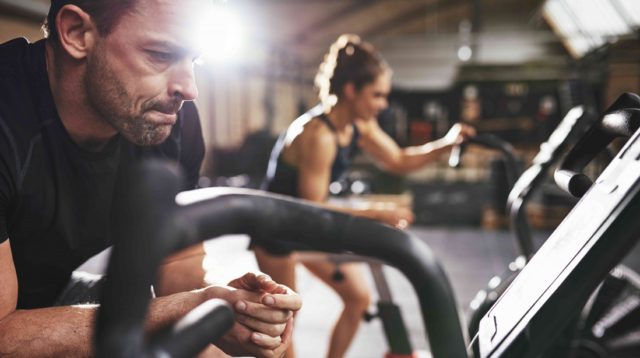 Getting to the gym can be tough. Motivating yourself to push beyond your threshold for the sake of gains is even tougher. That’s why so many guys look to training buddies not only for encouragement (or straight up competition, which can also give you a serious edge), but also to make working out a more social, enjoyable experience.

But how much influence do our gym buddies and training partners actually have on our own personal fitness? A lot, it turns out.

Our commitment to exercise—or whether we partake at all—is influenced by our responses to other people’s training, according to a new study published in the journal Nature Communications. The study sampled data from a large-scale, international social network of fitness routines (it focused on running in particular because the majority of network participants just so happened to be runners), and even tracked weather reports to determine how likely someone was to run outside.

And while it may not exactly be groundbreaking news that exercise can indeed be socially contagious (stop and ask yourself how many friends you’ve made at the gym or playing rec-league sports), even we were surprised at just how much other people’s workouts can impact ours.

Over the study’s five-year period, friends within the network consistently displayed similar workout regimens. More active runners, however, were more likely to be influenced by their less active friends—supporting the long-held theory that the best training buddy is one who is just a little bit behind you in terms of fitness (so that you stay motivated to not fall behind them).

Gender also played a significant role: Both men and women could affect the workout plans of another man, while female runners were unaffected by the routines of their male counterparts. (Classic, dudes.)

Bottom line? “In general, if you run more, it is likely that you can cause your friends to run more,” said Sinan Aral, lead study author and David Austin Professor of Management at M.I.T.

With new science to back it up, you’ve got yet another reason to find a good workout buddy (especially one with a few of these important traits) and take on this three-day program for training buddies.