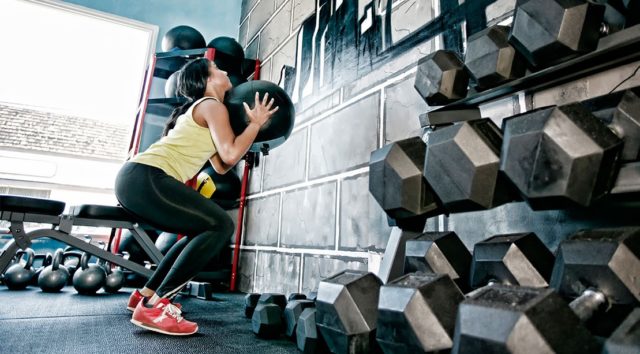 If you’ve got an aching knee or a sore hip, your joints may not be the main source of concern. Active women often suffer what’s known as iliotibial band syndrome, or ITBS, says John Gallucci Jr., P.T., the president and CEO of JAG Physical Therapy in New York. ITBS is an overuse injury that can develop when there is inflammation in the iliotibial band, a line of thick tissue running from the outside of the hip (aka iliac crest), past the knee, and to the top part of the tibia. The IT band stabilizes the outside of the knee, so it gets worked in a variety of activities, whether you’re running, doing lateral leaps, climbing stairs, or lunging for a tennis ball.

Women suffer from ITBS more often because our hip anatomy means the knees tend to turn inward, causing IT tissue to rub against bone, creating inflammation. Runners who put in a lot of mileage are at high risk, as are those who repeatedly run on a banked surface (like the same side of the road) or those who do hill work (especially when you’re running downhill, where your IT band is working extra hard to keep knees stable). Whether you ride outside or in a class, cycling can also cause problems, especially if your foot rotates inward in the pedal, which can increase tension on the IT band. And strength training can take its toll, especially if your routine includes endless sets of squats.

“Patients can feel a dull pain, usually outside the knee or hip, that typically gets worse with activity,” says Derek Ochiai, M.D., a sports medicine physician and an orthopedic surgeon in Arlington, VA. ITBS can also create pain and swelling outside the knee. Unsure if you’re struggling with an injury or just sore after a tough workout? “Soreness after a workout usually resolves by 50-70% in 24 to 48 hours,” Gallucci says. “IT band syndrome has more prolonged symptoms—the inflammation tends to sit in the tendon, so each time you work out the tendon gets tighter, and you’ll feel the pain or discomfort.”

If you catch the injury early enough, you can try DIY fixes: Rest, stretching, and using a foam roller to loosen up the muscle and fascia may help, and you should see your symptoms resolve in two to three weeks. If your pain lasts for more than five to seven days, it may be time to seek medical help. Your doctor or physical therapist may use a variety of treatments, including electric stimulation, heat, cold, cryotherapy massage, and foam rolling; and may recommend several stretches to help increase the elasticity of the tendon, as well as icing the area at least three or four times a day.

“If you keep trying to train through the injury, the tendon gets tighter and tighter, and ultimately the tissue can tear,” Gallucci says. You may start to feel tightness in the glutes as they try to make up for the weaker IT band, which in turn can affect the lower back, he adds.

Wearing proper footwear can help reduce muscle strain. “Overpronators [where the foot turns in as it strikes the ground while running] are more susceptible to IT band injury,” Gallucci says. Make sure your shoes are in good condition and fit you well. If you’re new to exercise, gradually increase your workload. “Don’t do too much too soon,” he says. Warming up with a few minutes of light movement can also help, as can gentle stretches before and after exercising to allow your muscles to work through their full range of motion.

Wrap a resistance band around bottom of foot, and lie face-up on floor holding band in the opposite hand. Lift leg above your hip, then slowly bring working leg across your body until you feel a stretch in outside of hip. Hold 30 seconds; switch sides. Do 3 times total.

Stand with left leg crossed over right, left hand on hip, and right arm raised above head. Lean to your left side, feeling a stretch along outside of right hip and thigh. Hold for 30 seconds; switch sides. Do 3 times total.

15 FOODS THAT ARE HEALTHIER THAN YOU THINK