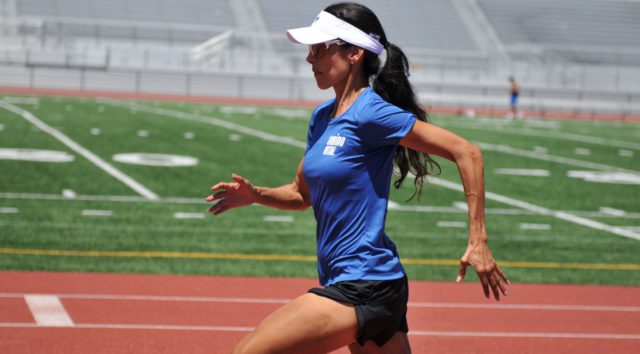 Many cringe at the thought of running a marathon, but that’s just a leisurely jog for ultra runner Bree Lambert, the USA Track and Field Masters Ultra Runner of the Year in the Mountain Division. The ultra runner and mom is a veteran endurance athlete and even coaches through her website, Live Well, Finish Strong. And, in case you’re wondering, she finds plenty of time for family, too.

She’s currently gearing up for the Western States 100-Mile Endurance Run on June 24-25, where runners face an 18,000-foot climb over freezing mountain trails and 100° desert heat to complete the 100-mile course in under 24 hours.

We got a hold of Lambert to find out about the training, planning, and sheer grit that goes into running 100 miles non-stop in under 24 hours.

M&F Hers: How did you get into ultra running? It doesn’t seem like something you just decide to do one day.

Bree Lambert: It evolved out of an accident, so to speak. I used to race triathlons. I raced XTERRA mountain bike triathlons and then also Half Ironmans, but I was an avid XTERRA mountain bike triathlete, and, while I was out on a training ride, had an accident that broke my pelvis and my collar bone and chewed up the left side of my body. I was told that I would never be able to do endurance athletics.

I could bike, but the doctor told me that the pounding on my body from distance running would be too much. I, being the determined person that I am and having the knowledge that I have about the body, its ability to heal itself, and understanding mechanics and so forth, rehabilitated myself. It took a year. I came back, but I lost the fire to do the mountain bike triathlons after that and got back into road triathlons. After about a year and a half of doing that, it just got so boring.

A friend of mine suggested trying an ultra, and I wasn’t even sure I could do it because I had just recovered from this injury. But I signed up for a 50k, and it really was the launch point for me because I ran this 31-mile trail race without any specific training, and just loved the experience of it. I just loved being out on trails for a long time. I’m an endurance junkie. I really like to test the boundaries of what I think I can do, and so that’s just a natural wiring.

What was training for and running your first 100-mile race like?

I ran my first 100-miler, the Tahoe Rim Trail 100, in 2009. The buildup to that first 100-mile race was actually over a period of time, because it was about four years before I felt confident enough to run 100-mile race. I picked the Tahoe Rim Trail 100 because I love running in mountains. The course seemed to suit me because I consider myself more of a mountain ultra trail runner.

I think I tried different fueling methods. I started using amino acids, played with my training and more hill training, and that sort of thing. Then I just went out and did it, and didn’t know what the outcome would be like because I don’t think when you run 100-mile races you ever really know for sure what the day is going to present because there are so many factors with environments and the terrain and wildlife. You don’t know how your stomach’s going to hold up when you start to give it calories.

That’s still an incredibly long time to be running. How do you manage to stay motivated throughout the race, and to keep pushing through physically and mentally?

Physically, it’s really a matter of being trained up. I coach other runners through Live Well, Finish Strong, and I work with runners of all levels. One of the things I tell them is that you really have to pick your distance carefully, and make sure that your body is ready for it. The mechanics have to be solid, you’ve gotta put in the time. You can’t just run a few miles here, a few miles there. It’s gotta be consistent training. The physical aspect is important, but the mental and the nutritional are far more important.

Nutrition becomes the lifeline because you won’t make it if you don’t have the calories coming in on the consistent basis, and you’re not staying on top of your hydration. I use Amino Vital‘s amino acids products, and have found them to be effective. For a racing piece, depending on the distance, if it’s a 100-mile race, I will take in some solids, but that happens generally later and it might be some peanut better and jelly sandwich squares, fig bars, nut butter wraps, avocado wraps, soup, and that’s it. I pretty much rely on the hydration and the amino acid replacement to get me through the majority of my races. I think a lot of ultra runners think that they need to be chowing all the time because they’re like, “Oh yeah. I’m burning all these calories in.” But your body can only digest so many calories per hour.

Then the mental component, that’s important too because when the physical starts to fail you, your head has got to stay in the game. You’ve got to be able to ride through those low points because you’re going to hit them no matter what. It doesn’t matter. The most elite runners will hit a low point, and you’ve got to be able to mentally pull yourself through that and realize that it’s temporary. For me, my business is Live Well, Finish Strong, and so I really believe that. I think that whatever I do, whenever I do a race, I always think no matter what I’m going to finish strong. I think about that and I think about the things in my life that I’ve had to overcome and resort to just thinking about this is a blip on the screen.

Then what does a typical week of training look like for you?

I always have at least one rest day, usually on Monday. On average, depending on where I’m at in my training phase and what I’m training for, the mileage can vary between 60 miles on up to about 80. I try not to go over 80 because, for me, I found that that’s effective. I’m not a big mileage person. I think it just stresses the body too much, particularly the adrenals. I think for me this is what works. This is the advice that I give my clients as well, just to stay on a more moderate side of the mileage range. I also spend at least one day a week maybe doing a spin class with a three- to five-mile run, and then I focus on core work, so I’ll do planks and a lot of functional-type training where I’m really working on imbalances.

Now, you’re also a mom. How do you balance that with training?

I get asked this all the time. My daughter jokes around because she literally was born to an endurance mom. From the womb, she was moving. I was even running trails when I was six or seven months pregnant. Then I kept mountain biking, but I had to get off my mountain bike because the doctor was like, “You’re going to fall and crush your kid.” So I was responsible and, of course, had to stop riding and running trails. But from birth, she just knew that this was the way of life. I love being a mom and she’s my first priority. If I’m going to train, I make sure that I’m training when she’s in school, or early in the morning. I really strive to balance out family time with work and training because it’s easy to get consumed by any one of those. The reality is that there’s only so much time in the day. I just stay realistic about how much time I have for work or for training. I’ve managed to find the delicate balance between all of those things, and I think a lot of people have a hard time with that.

Do you have any advice for people who maybe think, “I would never be able to do that.”? In your coaching, do you find that a lot of times people realize that they’re way more capable than they think they are?

For sure. I think one of the biggest barriers that most people have to overcome is the discomfort that they are going to experience while they’re training. They don’t like to hurt and they don’t like to push hard. They want to be able to just do it and say, “Oh, I did it, and I sweat a little bit,” but in order to be really good at anything, any sport, you have to be comfortable with being uncomfortable. You have to be willing to suffer, which I hate to say because I think it’s so overused, but I do think that there is a degree of suffering that you have to be comfortable with and learn to embrace it. I think a lot of it is the mental piece too because they’re like, “Oh my gosh. It’s so hard. It doesn’t feel good.”

I’ve had some really hard races, but I know that and yet I keep going back because I’m passionate about the sport, but also there’s so many wonderful things that come out of doing what I do. I anticipate that. I think if people can just understand that tough races and training are part of growing to be a better athlete and a better, fitter person, then that’s OK. It’s good. It’s not like they have to go out there and just start running marathon events. Being realistic about where they’re starting, and then just building up gradually and allowing that process to unfold as they move forward. 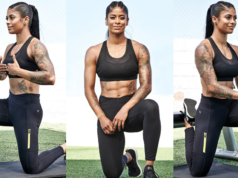 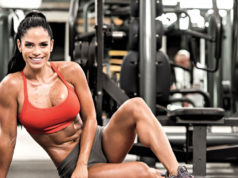 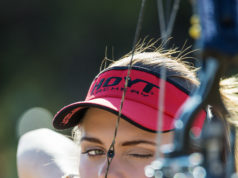 THE ULTIMATE BEGINNERS GUIDE TO ROWING

THE 2 BEST EMOM WORKOUTS FOR A TIGHT, TONED PHYSIQUE

THE FULL LEG WORKOUT FOR TONED QUADS AND HAMSTRINGS