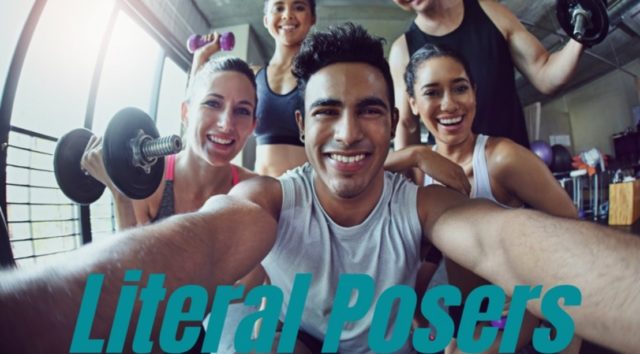 Social media is for turds. At least that’s what we all tell ourselves. It’s a sink on our time, it makes us depressed, it’s possibly causing the total fracturing of society into intensely specific tribes of niche interests. But what if we could take this awful monster, slap some tackle on that bad boy, and harness it for our own good? In this case, I’m talking about using social media to stay on your fitness goals.

A simple search for #OnAQuest hashtag and you’ll get your butt to the gym.

I’m sure, by now, you’re already rolling your eyes at the idea of becoming a person posting self-aggrandizing “workout” photos like some vapid fitness buff trying to sell their brand. Nah, friend, I’m not talking about them; I’m talking about you. You’re not one of those people, you’re a real person who wants to stay on track with your nutrition and exercise. You don’t have to worry about coming across like some vain weirdo who only posts “gym booty” pics. And, here’s a little “Shamalyan Twist” for you, did you ever consider that maybe those people were in the same boat as you once? And now they’re just so ripped it looks like they’re vain? #MindBlown

Alright, let’s get down to brass tacks.

Let’s start with two words: positive reinforcement. Studies show that positive reinforcement works much better than negative reinforcement in terms of motivation. All those likes on your workout pictures and scale victories feel good. That good feeling reinforces the already great feeling of taking care of your body. We’re creating an upward spiral here. Social media may be terrible but it is good at one thing: inflating egos. Why not use it to pump yourself up a little bit at the same time?

Social media can be used for inspiration, not just an excuse to watch thong/speedo squat videos on Instagram. Not only can you follow people you like who are going through a fitness transformation, but you can do the same and inspire your friends. It can be super-awkward and unwelcome to tell a friend who needs to lose weight that it’s time to get their ass to the gym. However, if they see you posting about your own weight loss success and progress they might be inspired to try it out themselves. Weight loss support groups on Facebook, wielding inspirational hashtags on Twitter to help motivate friends instead of retweeting World Star videos, and even YouTube journals can all create a community where other like-minded people are working on their fitness goals. That’s a powerful tool.

Just in case you forgot from just a few paragraphs ago—feeling the motivation yet?

We all like to joke about the pitfalls of social media and how dangerously self-absorbed it can be but there’s a silver lining to every cloud. (Look ma, an unintentional tech pun!) We’re allowed to absorb things that work for us, even if it’s from something we don’t like. Using a tool like social media to create positive feedback loops and inspiration can help you build your own support system for your fitness goals. Working out and eating right isn’t always easy, so the more weapons you have in your arsenal the better your chances of winning the battle of the belly bulge.

THE SURPRISING TRUTH ABOUT SEAFOOD