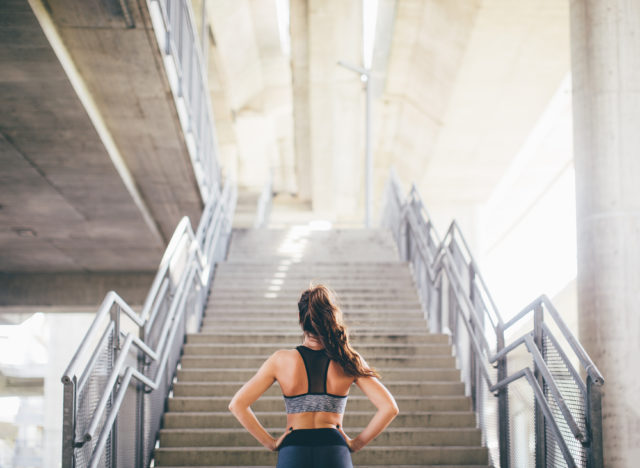 “When exercise ends, it takes time and energy for muscle cells to return to resting levels. Recovery can also be expensive: Depleted glucose and fat stores need to be refilled, accumu­lated cell products need to be removed and protein levels need to be built back up. All this requires energy.” And the more rebuilding to be done, the greater the rate of EPOC, which in turn means more calories (using fatty tissue as fuel) are being burned after your workout.

While the primary factor in determining EPOC is exercise intensity, says Scott, so is duration—just not to the same extent. Numerous studies support this idea, such as a Journal of Strength and Conditioning Research study done by Cedarville University (Ohio) researchers. When women performed either a weight-training or a cardio session, both of which burned the same amount of calories and were similar in intensity, the subjects experienced similar EPOC responses.

It’s well known that lower-intensity aerobic exercise burns fat, but that doesn’t mean your workouts should be a walk in the park. “Intense exercise is associated with a tremendous amount of fat breakdown,” says Scott. “The higher the exercise intensity, the greater the amount of carbohydrate burned. But the energy requirements of recovery, especially an active recovery, need to be considered. To be sure, muscle uses mostly carbs during weight training, but all the fat that’s broken down during exercise is subsequently used to fuel recovery. EPOC primarily depends on fat and lactic acid as fuel. In fact, the recovery from EPOC is almost all aerobic and a terrific oxidizer of fat.”

That said, the programs featured here vary in level of intensity and duration but all have a high EPOC. Whatever your preference, there’s a workout geared to you.

What Is Intensity Rating?

Besides heart rate and the amount of oxygen you consume during exercise (VO2 max), determining your exertion is as easy as quantifying it with an Intensity Rating. No fancy watches or lab appointments are necessary; perceived exertion is simply how hard you feel your body is working based on the physical sensations you experience —increased heart rate, breathing rate, sweating and muscle fatigue. Although this is a subjective measure, your exertion rating can provide a fairly good estimate of your actual heart rate during physical activity. This allows you to adjust the intensity (and, as a result, improve the benefits) of your workout.

HOW TO USE THE INTENSITY RATING SCALE

During your workout, rate your perception of exertion. It should reflect how heavy and strenuous the exercise feels, combining all sensations of physical stress, effort and fatigue. Don’t concentrate on any one factor, such as leg pain or shortness of breath, but try to focus on your total feeling of exertion.

Use the scale above as your guide. It ranges from 1 to 10, where 1 means no exertion at all and 10 means maximal exertion. Choose the number that best describes your level of exertion. This will give you a good idea of the intensity level of your activity, and you can use this data to speed up or slow down your movements to reach your desired range.

Most important, concentrate on how you feel instead of what the actual workout load is. If you get hung up on numbers, time, weight or your treadmill neighbor, you won’t be able to get an honest assessment.

EPOC Program 1: Keep Up the Tempo

Run, walk or bike at a steady pace that has you working at 80%-90% of your maximum heart rate (MHR) or 6-7 intensity rating. (To calculate your MHR, subtract your age from 220)

Why it works: University of New Hampshire (Durham) researchers examined the effects of constant walking at 70% intensity on a treadmill for 20, 40 and 60 minutes with three hours of recovery. While EPOC was elevated in each of the three trials as compared to the control, it was significantly higher after the 60-minute bout of exercise. More specifically, the 60-minute-duration EPOC measurement was approximately twice that of the 20- and 40-minute durations.

Go the distance doing the activity you like—biking, running, walking—at a light to moderate pace.

Why it works: Researchers at the Laboratory of Nutrition and Exercise Physiology at Nakamura Gakuen University (Fukuoka, Japan) examined the EPOC effects after moderate exercise. Subjects performed 30 or 60 minutes of exercise on separate days of 60% VO2 max, which equates to about 70%–75% MHR. Results indicated that longer-duration exercise results in a greater and longer EPOC. More specifically, EPOC lasted for 116 minutes after the 60-minute bout compared to 46 minutes for the 30-minute workout.

In a separate study, University of Victoria (Canada) researchers found similar results and concluded that increasing work time elevates energy cost during and after exercise.

Can’t commit to just one activity? With this workout, you don’t have to. Mix up your cardio activities by doing 2-4 bouts of high-intensity exercise that are 15-20 minutes each. Or switch between weight training and cardio, but keep the intensity high. Rest up to five minutes between each bout, or walking to your next machine will do.

Why it works: When researchers at the Flinders University of South Australia (Adelaide) compared continuous running for 30 minutes at 70% VO2 max (about 80% MHR) and interval running of 20 one-minute intervals at 105% VO2 max (100%-plus MHR) with two-minute rest periods, the latter was the EPOC winner. The supramaximal interval training had double the EPOC levels as its continuous-exercise counterpart. In another study, Norwegian scientists found that supramaximal training of three two-minute bouts of exercise followed by three-minute rest periods produced EPOC for up to four hours.

Perform one weight-training exercise per bodypart at 20 reps per minute (slow and controlled on both the up and down portions of the rep) with a weight load that’s 60% of your one-rep max. Run to each station and complete the circuit three times, resting only 20 seconds between each. Circuit: Leg press, biceps curl, bench press, triceps pulldown, lat pulldown, crunch, lateral raise.

Why it works: Circuit training that consists of three sets of eight exercises resulted in a higher EPOC within 30 minutes of exercising as compared to an equivalent-intensity treadmill workout, according to researchers at Shippensburg University (Pennsylvania) in the journal European Journal of Applied Physiology. The duration of your resting period may also impact your EPOC after circuit training, say Southeastern Louisiana University (Hammond) researchers. They found that a higher EPOC occurred when subjects rested 20 seconds between circuits than when they took 60-second rest periods.