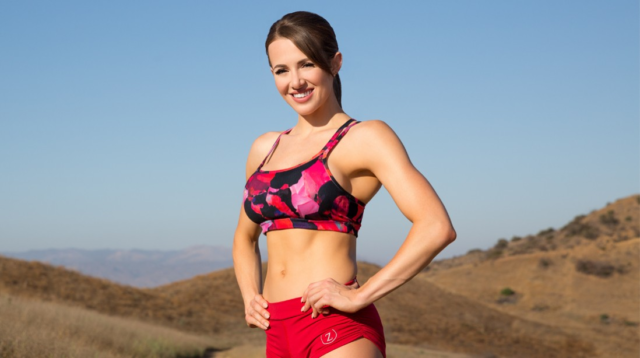 Take our toughest total-body conditioning workout outside this spring.! We’ve packed eight high-intensity exercises into one workout using plyometrics, or jumping, movements so you can do this routine anywhere, recruit the maximum force of your muscles in the shortest amount of time, and take your speed and strength. to the next level.

HOW TO DO IT

Beginners: Start with 12–15 reps; work up to 20 with 20 seconds’ rest between moves. To make it harder, shorten the time you’re in touch with floor. Do at least 2 rounds.

Intermediate/Advanced: Do 20 seconds on, 10 seconds off. Rest only 10 seconds between rounds. Do 3 rounds and work up to 4 rounds.

Spring forward lifting the right arm and left knee into the air, as if skipping. Make each jump powerful while keeping a good rhythm as you move forward.

Place your hands behind your head and interlock your fingers, keeping abs tight. Lower down into a squat position and jump forward, landing in a low squat. Remain in a squat as you jump forward again, without standing up.

Jump to your right, landing in a slight squat on your right foot while bringing your left leg diagonally behind right leg, arms crossing your body to the right as you land; don’t let your left foot touch the ground. Quickly jump to the left side, bringing right leg behind left and arms across body without touching right foot to ground. (If you’re doing reps rather than for time, once right and once left is one rep.)

Stand with feet shoulder width apart. Jump up and reach arms toward sky while turning 180 degrees, then land in a squat. Alternate directions each time. A 180-degree jump to the left and then to the right is one rep.

Start in the bottom of a pushup position with your body in line from the top of your head (chin down) to your heels. Explosively push yourself up, straightening your arms and bringing your hands off the bench. Quickly clap your hands midair before catching your body in the starting position. Keep elbows close to your body.

Begin in a plié squat position with heels slightly wider than the shoulders, knees turned out. Jump up, bringing straightened legs together and gently click your heels. Land in the starting position and immediately begin the next jump. Focus on your glutes powering you up and controlling your descent.

Stand with feet hip width and then perform a broad jump, moving as far forward as possible and landing softly. Then place hands on the floor and thrust your legs back behind you into a straight-arm plank. Quickly jump feet back in and stand, immediately launching into the next jump.

Jump up onto a box or bench, landing in a squat. Be sure the angle of the knees when landing is the same as when you jump, so your knees track over your toes the entire time. To make it easier, step back to the floor rather than jumping.

10 healthy foods that give you energy

WHEN YOU EAT IS JUST AS IMPORTANT AS WHAT YOU EAT

TORRIE WILSON MAKES A COMEBACK IN THE FITNESS WORLD