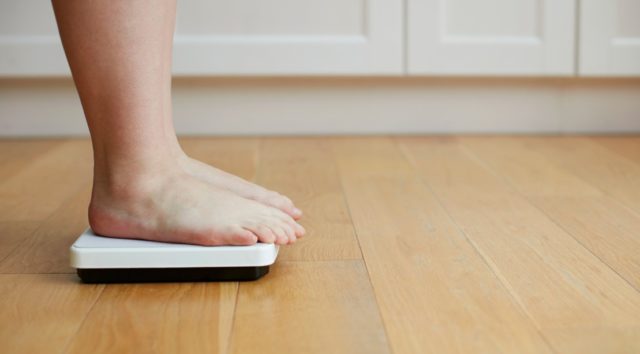 BMI is a common way to estimate someone’s body-fat levels and overall health, but it’s not the most accurate. While it’s quick and easy to plug in the numbers to get a rough idea of someone’s body-mass makeup, it doesn’t account for things like bone density and muscle mass, so several people with the same BMI could have different amounts of body fat. In a recent study, scientists compared more detailed analyses of body composition and discovered that the amount of body fat postmenopausal women have may be connected to their breast cancer risk.

In a study that analyzed data on 3,460 women between the ages of 50 and 79 with normal BMIs (18.5-25) for an average of 16 years, scientists found that women with the highest body-fat percentages were at a greater risk of invasive breast cancer than those with less body fat.

The study, which was presented at the American Association for Cancer Research Special Conference “Obesity and Cancer: Mechanisms Underlying Etiology and Outcomes,” analyzed body-fat levels with dual energy X-ray absorptiometry, or DXA, which specifically measures fat content. Although the women were all within the normal range as far as BMI goes, the differences in body-fat levels appeared to affect their risk of invasive breast cancer.

“It was previously unknown whether individuals who have a normal BMI but increased body fat have an increased risk of developing cancer,” Neil Iyengar, M.D., medical oncologist at Memorial Sloan Kettering Cancer Center, said in a press release. “Our findings show that the risk of invasive breast cancer is increased in postmenopausal women with normal BMI and higher levels of body fat, meaning that a large proportion of the population has an unrecognized risk of developing cancer.”

The study still sheds light on the idea that BMI may not always be a good way to assess a person’s risk of bodyweight-related diseases or conditions.

“These findings will probably be surprising to many doctors and patients alike, as BMI is the current standard method to assess the risks for diseases related to bodyweight,” said Andrew Dannenberg, M.D., associate director of Cancer Prevention at the Sandra and Edward Meyer Cancer Center of Weill Cornell Medicine, according to the press release. “We hope that our findings will alert women to the possibility of increased breast cancer risk related to body fat, even if they have a healthy weight.”

Researchers note that the study was solely in postmenopausal women, so the findings can’t be applied to the general population. It’s also notable that the increased risk may not just have to do with weight, but also physical activity habits.

HOW ANY KIND OF LIFTING CAN LOWER INFLAMMATION IN YOUR BODY

TORRIE WILSON MAKES A COMEBACK IN THE FITNESS WORLD

THE CARBS THAT MAKE YOU FEEL DEPRESSED