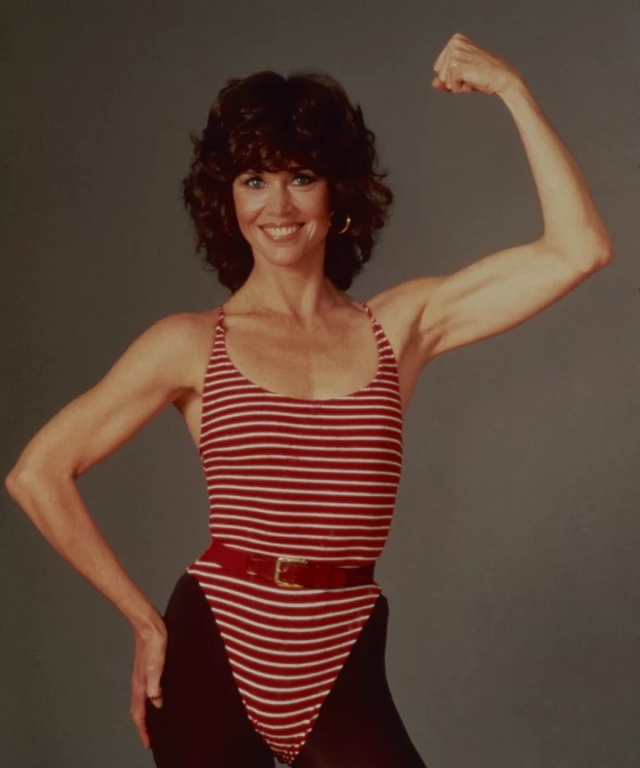 Although it may seem as if it’s been ingrained in society since the dawn of time, the culture surrounding physical fitness is still a relatively new invention. Back before the days of 24-hour gyms and at-home workout equipment, people got their exercise just by living their daily lives. People spent more time on their feet working in factories or in farming, and had little leisure time to spend making gains. As dark as it sounds, many families didn’t even have enough food to go around to be unhealthily overweight in the first place.

It seems strange to think about it now—in today’s fitness- and “thinness- obsessed-culture—that there was a point in time when being overweight was seen as a status symbol simply because you could afford to eat more.

But part of the fun of fitness being such a new industry is that we get to watch its growing pains in real time, and boy were there some cringe-worthy, coming-of-age moments. So sit back and scroll through these five fitness trends throughout the past century. If Jazzercise doesn’t scream “gym culture’s puberty,” we’re not sure what does.
The Vibrating Belt (and Other Horrors of the 1940s)

Starting off its bizarre entry into fitness history is the vibrating belt—and no, it isn’t what you think it is (although, I’m sure someone found a way to use it like one). These machines first entered the burgeoning fitness scene during the 1920s, when Americans were experiencing a period of prosperity, finding themselves with more time to worry about their appearance. The concept behind this machine is simple. Women would place the belt around whatever “problem” area they wanted to get thinner—calf, thigh, or even the butt—and the machine would rapidly shake the belt, jiggling the fat away.

Throughout the 1940s women were encouraged to lose weight, which was then called “reducing,” by joining reducing parlors to be hooked up to these strange devices. According to Harper’s Bazaar, the most popular of these reducing parlors was called “Slenderella” and claimed “to slim women in all the right places without the “toil and suffering,” according to Elizabeth Matelski, PhD and author of Reducing Bodies: Mass Culture and the Female Figure in Postwar America.

Yes, fitness culture was incredibly new when these machines first came out, but there are reports of these devices being seen in gyms up until the 1960s. Why anyone ever believed this could possibly work is still a mystery. Other torture, ahem, fitness machines from this era are the “streamliner,” which was sold to women as a device to flatten their problem areas.

If you’re feeling so inclined, you can actually purchase one of these bad boys on eBay. A Buzzfeed writer even bought one and documented her experience. Buyer be warned, these devices are pretty massive, and most online sellers can only arrange for them to be picked up, not shipped.

Of Military Wives and Jazzercise

Jazzercise began in a place people would never have suspected: a college campus. The now decided, uncool fitness craze of the ’70s and ’80s was started by Judi Sheppard Missett in 1969, following her graduation from Northwestern University in Chicago. While working as a dance instructor, Missett noticed more students were becoming interested in becoming physically fit rather than being skilled dancers. She began teaching classes with a greater emphasis on fun, using jazz as a cardio warm up.

Check out the fun for yourself with this complilation of Missett’s classes.

The fun didn’t stop there. Combining dance, strength and resistance training to form an upbeat, full-body workout, Jazzercise went on to become a physical fitness powerhouse. She taught classes at rec centers and military bases throughout the ’70s in California, with the traveling military families spreading the gospel of Jazzercise across the country. Missett soon franchised the program and by 1984, achieved a whopping $40 million revenue, 350,000 students and 2,700 instructors—almost entirely women. The only franchise larger than Jazzercise at the time was Domino’s Pizza. So, Jazzercise was almost as popular as pizza. Let that sink in while you’re laughing at those jazzy legwarmers.

Interestingly enough, Jazzercise was also the first fitness class where the instructors wore microphones. So the fact that you can actually hear your instructors from the back of your crowded gym class is all thanks to Jazzercise.

And if you still think Jazzercise is a neon-colored-leg-warmer-clad relic of the past, think again. There is still a small, but vibrant Jazzercise scene in New York City and in small communities all across the US.

Jane Fonda has, and probably will always be, a huge figure in American popular culture. Between Oscar-nominated films and anti-war demonstrations, there is a huge chapter of Fonda’s story we should never forget: her career as an ’80s fitness icon.

Fonda released her first aerobics video, Jane Fonda’s Workout, in 1982. The VHS video came on the heels of Fonda opening her first workout studio in 1979 in order to give women a space to workout in a gym landscape dominated by musclemen and bodybuilders. Fonda incorporated her love of ballet into her aerobics routines to make the workouts more enjoyable for herself, but soon found others were drawn to her routines as well. In 1981, she published Jane Fonda’s Workout Book, which spent more than six months on the non-fiction bestseller list and inspired the series of VHS tapes that followed.

As a reigning member of Hollywood royalty and a cultural icon in her own right, Fonda sparked the aerobics craze of the 1980s, all while posing in black tights and legwarmers. She also popularized the culture of women working out in general.  The first video opens up with Fonda appearing on screen in a baby pink, moto jacket explaining how she wanted these tapes to give women the freedom to workout on their own terms outside of the predominantly male-dominated gyms of the era. With more and more women independent in the workforce, these women had disposable incomes to spend on VHS tapes and books for self-improvement and physical wellbeing. Also, leg warmers were cool in the 1980s. They were the original athleisure trend.

Fonda was able to continue this successful venture throughout the entire decade, with some of her best-selling videos released in 1986 and 1987 with Jane Fonda’s New Workout and Jane Fonda’s Low-Impact Aerobic Workout, respectively. It certainly helped that Fonda’s slender, muscular physique was a walking advertisement for her product. The then 43-year-old actress appeared in the acclaimed film On Golden Pond in 1981, and if you weren’t too busy focusing on the real-life tension unfolding on-screen with her father Henry Fonda, you definitely noticed how incredible she looks in that bikini scene.

While Fonda retreated from the spotlight altogether following her divorce in the early 1990s, her fitness legacy lives on. You can still purchase her original tapes for $9.99 on Amazon Prime Video or as physical DVDs complete with leg-warmer clad cover art on her website if you’re feeling really nostalgic. Vogue detailed how one reluctant gym-goer found the vintage tapes to be her favorite fitness trend by far after watching the videos on Amazon. Maybe Jane Fonda’s Workout, like fine wine and Fonda herself, only gets better with age.

WANT AN UNBEATABLE CARDIO WORKOUT? RUN UP THE CLOSEST SET OF STAIRS.

COOKING AT HOME CAN HELP YOU EAT HEALTHY, STUDY SHOWS