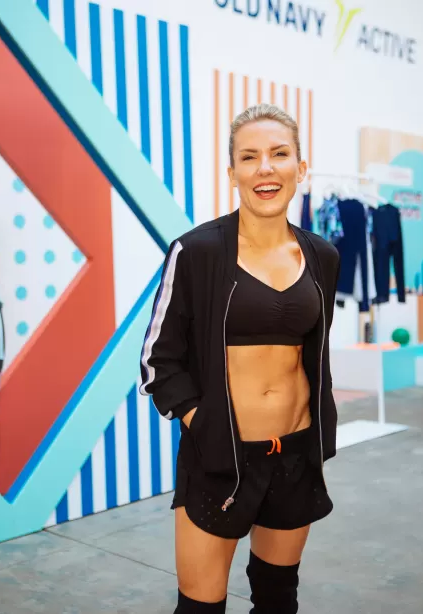 We all look to celebrities for fitness inspiration, but the reality is that behind pretty much every enviable celebrity body, there’s a trainer making that progress happen. For celebs like Shakira, Kelly Ripa, and Karlie Kloss, that trainer isAnna Kaiser.

Kaiser is no stranger to the fitness world. She started teaching dance classes in 1997, when she was still in high school, went on to study dance at the University of California, then kinesiology, sports medicine, and functional anatomy at Mount Sinai Medical Center. Thanks to her combination of knowledge about how the body moves and how the body works, her high-energy circuit training, HIIT, dance, Pilates, and yoga workouts get the job done—and people took notice of the results of her training methods early on.

By word of mouth, Kaiser became a go-to trainer for celebrities striving to look better and reach a higher level of fitness. Now, she has her own program, AKT, that includes both online-based fitness programs and studio locationsat which anyone can get the same training that keeps their favorite celebrities in top shape.
1. Don’t Think You Have to Torture Yourself to Get Fitter

There are two types of people in this world: Those who love to work out, and those who would rather do anything other than suffer through an hour of exercise.

The latter likely hate it because they think that exercise needs to be excruciating—but that’s not the case, Kaiser says.

“Some workouts are as difficult as you can handle, but you don’t need that to get fitter,” she says. “You can get everything you need from a workout without feeling like you’re going to throw up and die.”

With her AKT classes, she makes sure that the workouts accomplish their intended mission without the throw-up-and-die sensation that some workout programs cause. But results don’t lie, and she makes sure that clients achieve the body and fitness goals they set with the help of her routines.

Making a resolution, New Year’s or not, to train harder and make a transformation may be well-intentioned, but people tend to make commitments that are impossible to stick to, Kaiser says.

“Instead of over-committing and saying you’ll work out every day, try saying you’ll work out at least three days a week,” she says. “Then, if you hit the fourth day, reward yourself with something like $20 in a jar or drinks with your friends.” As a general rule, she says that the commitment you make shouldn’t be the same as your reach goals. Setting more reasonable expectations for yourself will also keep you from feeling down when you aren’t able to stick to a crazy new routine, she says.

Kaiser donned head-to-toe Old Navy Active during the workout, and says her favorite thing about the line is how easy it is to find an outfit that makes you feel great.

“It’s easy-to-wear, and it’s flattering on everyone,” Kaiser said. “It’s affordable, but it still holds you in.”

The simplicity of the cuts makes it comfortable no matter how you move during your workout, and there’s a variety of colors, prints, and neutrals to suit any mood.

When it comes to nutrition, one of the biggest mistakes people make is not doing their research on carbs, Kaiser says. “People should be more aware of the carb-to-fiber ratio in the foods they’re eating, because even things like vegetables have carbs.” So when you say “I’ll only eat X amount of carbs per day,” Kaiser suggests noting the fiber content of carby foods and subtracting the grams of fiber from the carb count.

People should also be more conscious of the sugar they’re ingesting, both in natural and processed foods, Kaiser says.

5. Work With Trainers Who Know What They’re Doing

Having a trainer or following a program that changes to suit your needs is an integral part in not just getting fit, but staying fit. So if you take the same exact classes each week, a plateau is inevitable.

“Keeping someone in shape and getting them fitter is much harder than getting them in shape in the first place,” Kaiser says. But she’s got it down, and every client at AKT gets customized programs and recommendations from her the same way a celebrity client would. That way, there’s no guessing which combination of classes suits your goals. And the classes change every two weeks to keep everyone improving. 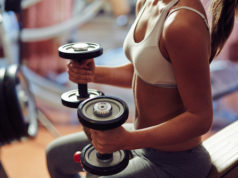 5 HEALTHY SNACKS TO KEEP YOU SATISFIED BETWEEN MEALS