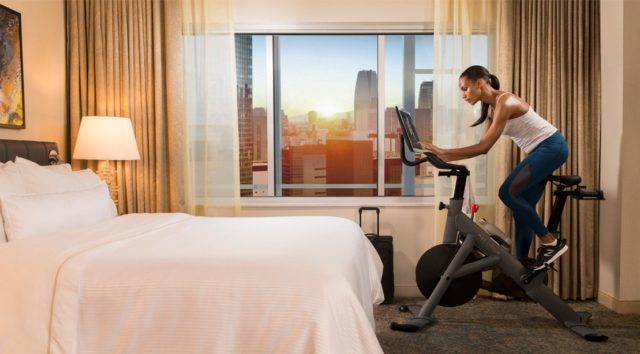 For the athlete who never misses a workout when she travels, consider staying at Westin Hotels & Resorts now that it’s partnered up with Peloton bikes for a tough cycling workout you can conquer in your hotel room. Book the WestinWORKOUT® guest room for an additional fee and have the option of getting a Peloton commerical-grade bike, giving you access to a trainer-led workout that’s taking place live in an NYC studio or stream an on-demand cycling class. Watch this Peloton Calorie-Blasting Cycling Workout. This Peloton bike is designed for gym environments and is the second product the company rolled out after launching its “studio cycling at home experience” in 2012.

Prior to this partnership, Westin was known in the fitness travel industry for its RunWestin guest program where it was teamed up with New Balance to lend gear to guests who wanted to work out in their hotels, and you could go for a concierge-led 3- and 5-mile run in select cities. Don’t forget to check out these Hottest Hotel Gyms in the U.S.

Over the next month, more hotels will offer the bike in their guest rooms.

If you’re staying in any of these locations, you can take the Peloton bike for a spin in the following WestinWORKOUT® fitness studios for free:

While travel can be an excuse for some to skip their workouts, Muscle & Fitness has plenty of no-excuses, do-anywhere workouts. Get more workout ideas for every part of your body here.

7 BODYBUILDING DIET MISTAKES THAT ARE SABOTAGING YOUR PROGRESS