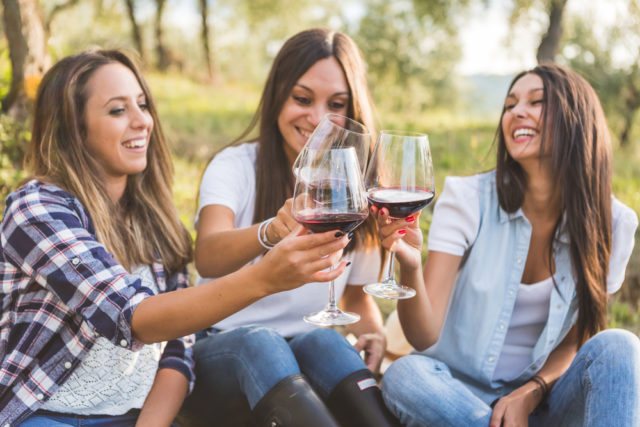 Alcoholic bevvies are designed to help you unwind, but that doesn’t mean your diet has to get in the slow lane, too.

Many of the purported health benefits of alcohol consumption are seen only at “moderate” levels. Moderate alcohol intake can “raise HDL [good] cholesterol, improve insulin sensi­tivity, and reduce markers of in ammation,” says Vasanti Malik, a research scientist in nutrition at Harvard’s T.H. Chan School of Public Health.

Yet the picture is not all rosé. Alcohol can also interfere with glucose production, and because it’s quickly processed by the liver, it also interferes with your liver’s breaking down of fat, which may lead to weight gain. Also, “make sure you get at least 600mcg of folate per day, since alcohol blocks absorption of it, which may impact cancer risk,” Malik says.

Vices and virtues aside, if you’re going to imbibe, here’s how to stay on your diet even in your downtime.

Vodka has been shown in limited studies, along with red wine, to be protective of the heart; yet other studies show that vodka, compared with red wine, can lead to cell death in liver tissue, so benefits are inconclusive.

The good thing is, due to the distillation process, most spirits (including whiskey, rum, and tequila) contain little to no sugar or carbs and about 100 calories per serving. A note for your noggin: The main culprit for hangovers is ethanol, which all alcohol has, but congeners (chemical compounds that worsen hangovers) may be up to 40 times higher in darker spirits and wine than in vodka. And mind the mixer: “To avoid spikes in blood sugar, skip mixed drinks with juice, soda, or syrup,” Malik says. Instead, drink it with seltzer or low-cal flavored waters.

Research finds that moderate beer consumption leads to fewer hangovers than drinking wine or spirits. It also may help protect from neurodegeneration. On the plus side, dark beer actually contains fewer calories (and lower alcohol and sugar content) than its lighter counterparts.

With beers, the bottom line comes down to alcohol content. According to craftbeer.com, the higher the alcohol, the more maltose (a type of sugar) is used and thus the higher the calorie content of the brew.

3. Dry It Out With Cider

Cider is naturally gluten-free and made from apples, pears, or even berries. That means it may contain more antioxidants than your favorite beer, but that also means it can be higher in sugars. Just like wine, though, the longer it ferments, the less sugar it has, and the drier it will be.

Red wine has been linked with lowered risk of heart disease and type-2 diabetes. Its high levels of antioxidants may help protect against oxidative stress, too. The antioxidant resveratrol, found in the skin of red grapes, has been shown to replace harmful belly fat (known as white fat) with obesity-reducing brown fat. By contrast, white wine is linked with higher levels of rosacea.

CHICKEN WITH MUSHROOMS AND THYME

HOW TO STAY FIT AND HEALTHY WHILE PREGNANT

HERE IS WHY YOUR ENERGY IS CRASHING MID-WORKOUT